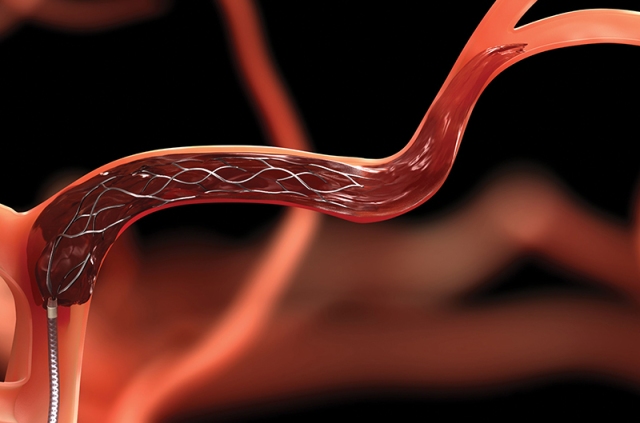 The time window for treating stroke patients may be considerably longer than doctors previously thought. Results from a multi-center clinical trial published Jan. 24 in the New England Journal of Medicine show that certain stroke patients can be successfully treated up to 16 hours after stroke.

Key to the success of the treatment was the use of advanced brain imaging that can identify stroke patients who still have salvageable brain tissue if blood flow can be restored. The study demonstrated that physically removing brain clots up to 16 hours after symptom onset in these selected patients led to improved outcomes compared to standard medical therapy.

University of Iowa Hospitals and Clinics was one of 38 stroke centers involved in the new study known as the Endovascular Therapy Following Imaging Evaluation for the Ischemic Stroke (DEFUSE 3) trial. The trial was led by researchers at Stanford University School of Medicine in California and funded by the National Institute of Neurological Disorders and Stroke (NINDS), part of the National Institutes of Health. The findings also were presented Jan. 24 at the International Stroke Conference in Los Angeles.

“This study will provide us with the opportunity to offer a life-saving and life-changing therapy to thousands of people,” says Santiago Ortega, MD, clinical assistant professor and neurointerventional surgery director in the UI Department of Neurology and principal investigator for the UI DEFUSE 3 study site. “As the top enrolling center in the study, the UI was an important contributor to this advance in the field of stroke and improving the treatment of this devastating disease.”

Ischemic stroke occurs when a cerebral blood vessel becomes blocked, cutting off the delivery of oxygen and nutrients to brain tissue. The area immediately surrounding the blockage is known as the core. When a stroke occurs, brain tissue in the core typically cannot be saved, and the core can expand over time. However, physicians have long believed that tissue in the area surrounding the core (known as the ischemic penumbra) can potentially be saved based on how quickly blood flow can be restored.

The key to the new study was an advanced brain scan called perfusion imaging, which measures blood flow in brain tissue. Perfusion imaging can identify patients with brain tissue that can still be salvaged by removing the blockage.

Using an automated software to analyze perfusion MRI or CT scans, the DEFUSE 3 researchers identified patients thought to have salvageable tissue up to 16 hours after stroke onset. The participants were randomized to either receive endovascular thrombectomy plus standard medical therapy or medical therapy alone.

Endovascular thrombectomy, or the physical removal of the blockage, is currently approved for use up to six hours following onset of stroke symptoms. The DEFUSE 3 researchers discovered that this intervention can be effective up to 16 hours after symptoms begin in this select group of patients. The findings also showed that patients in the thrombectomy group had substantially better outcomes 90 days after treatment compared to those in the medical therapy control group. For example, 45 percent of the patients treated with the clot removal procedure achieved functional independence compared to 17 percent in the control group. Thrombectomy treatment was also associated with improved survival. According to the results, 14 percent of the treated group had died within 90 days of the study, compared to 26 percent in the control group.

The DEFUSE 3 results along with other recent trials are so compelling they have provided a basis for significant changes in the guidelines for managing acute stroke. The new guidelines, announced Jan. 24 by the American Heart Association/American Stroke Association, recommend thrombectomy in eligible patients six to 16 hours after a stroke.

The DEFUSE 3 study was supported by NINDS’ StrokeNet, a network of hospitals providing research infrastructure for multi-site clinical trials in stroke care. The UI is one of StrokeNet’s 25 Regional Coordinating Centers (RCC), and the UI site enrolled the highest number of participants (15 of 182) in the DEFUSE 3 study. Enrique Leira, MD, director of the UI Comprehensive Stroke Center is the principal investigator for the StrokeNet UIRCC. Leira, along with Harold Adams, MD, UI professor of neurology, have been instrumental in establishing the UI Comprehensive Stroke Center as a national leader in stroke care.

“UI Comprehensive Stroke Center team has worked hard on developing an acute endovascular protocol and infrastructure to expedite the assessment and treatment of patients suffering from this devastating disease in our state,” Ortega says. “Numerous members from different departments including, EMS personnel, emergency medicine physicians and nurses, radiology technologists, neurologists, anesthesiologist and OR nurses, and neurointerventional surgeons are constantly involved in the process and deserve recognition for their important contributions to the success of this study.”

Colin Derdeyn, MD, professor and DEO of the UI Department of Radiology, who also served on the DEFUSE 3 central steering committee, adds his praise for the study team’s work.

“Our success in this trial is related to several factors, one being Dr. Ortega’s great leadership and the work of his team, of which I am glad to be a part. Another major reason is the incredible network built by Dr. Adams and Dr. Leira to provide fast, state-of-the-art care to patients affected by acute stroke across Iowa,” Derdeyn says. “I am not aware of another institution in the country that supports so many small rural hospitals and accepts so many stroke patients in transfer for advanced care and access to really important trials like this.”