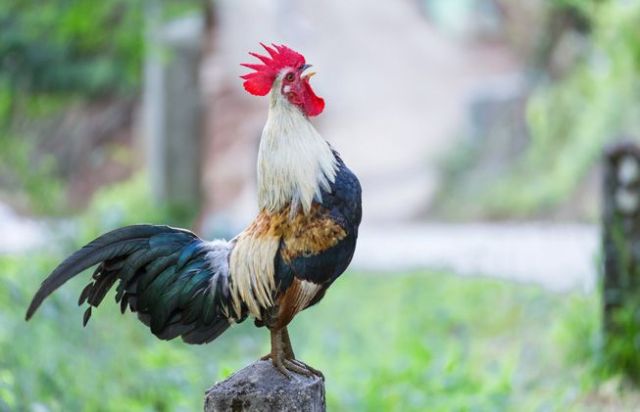 There’s a reason a rooster’s crow rouses the farm from a night’s slumber: It can be a very, very loud noise. It’s so loud, in fact, that you have to wonder how roosters don’t lose their hearing.

A crow for your ears only

Our ears are delicate. A sound louder than 120 decibels — which is roughly the sound of a chainsaw — can cause permanent hearing loss. The air pressure waves from the noise can, over prolonged exposure, harm or even kill the cells that convert sound waves into the noises our brains can process. At 130 decibels, all it takes is half a second to cause a bit of hearing damage.

Given that roosters can crow at least as loud as 100 decibels, or the decibel level of a jackhammer, you’d expect them to experience some modicum of deafness over the course of their lifetimes. Instead, they continue to hear just fine — and to greet the new day with a blaring hoot.

To figure out just how loud the roosters got, and how they were able to keep their hearing, researchers strapped microphones to the heads of three roosters, with the receiving end pointed at their ears. This was done to measure the sound levels that the roosters themselves would hear when they crowed. The crows were also measured from a distance away. And one other measurement was taken: the researchers performed micro-CT scans on roosters and hens so they could pick apart the geometry of how sounds bounce around in their respective ear canals.

The decibels levels were all over 100 decibels, meaning loud enough to potentially cause damage. One rooster even hit 140 decibels, or the sound level on an aircraft carrier deck, and easily loud enough to cause some damage.

It turns out that roosters keep themselves safe from their own crows with an anatomy adaptation. When they open their beaks to the fullest, a quarter of the ear canal closes and soft tissue covers 50 percent of the eardrum. Basically, they have built-in earplugs that protect them from their own noises. Hens are also protected. Like roosters, the hens’ ear canals also close up, but not as much as their male counterparts’ do.

This built-in protective ability makes sense from an evolutionary perspective. Crowing also serves as a warning to other roosters that this particular group of hens is spoken for — so superlatives rule. The loudest rooster would end up being seen as the most fit to mate with the hens.