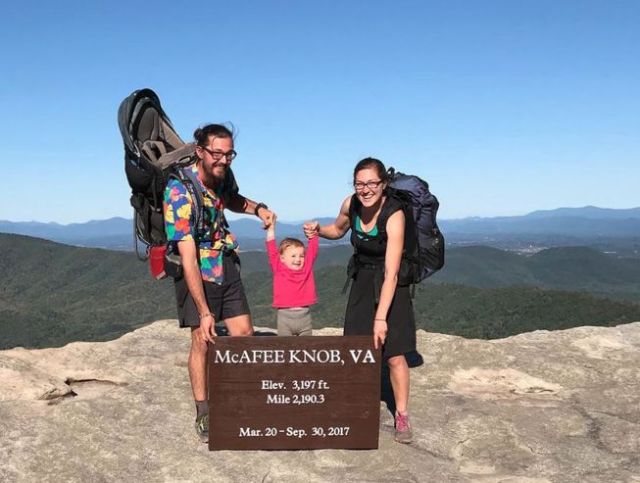 This year, about 2,652 hikers hope to thru-hike the Appalachian Trail and complete the 2,200-mile hike that stretches from Georgia to Maine within one year, according to the Appalachian Trail Conservancy, the organization that keeps track of the number and starting point of all hikers on the trail each year.
The people who hike the A.T. come from all walks of life — some are taking a sabbatical from high-pressure lives, others are students seeking adventure before they get down to the business of finding out who they want to become.

But for one A.T. thru-hiker, this year’s hike was neither an escape or an adventure — it was simply a chance to hang out with mom and dad.
On March 21, Ellie Quirin began her own A.T. thru-hiking journey along with her parents, Bekah and Derrick Quirin. Six months and 10 days later, the Quirins finished their hike on McAfee Knob, Virginia.

The Quirins did what’s called a flip-flop hike through the A.T. They started in Virginia and proceeded south. They reached Springer Mountain in Georgia’s Chattahoochee National Forest on May 13, marking the end of the first third of their hike (Spring Mountain is the southern terminus of the A.T.).

Flip-flopping through the A.T. offers a few advantages over just starting from Spring Mountain (for northbound hikers, or NOBOs) or from Mount Katahdin (for southbound hikers, or SOBOs). Per the Appalachian Trail Conservancy, flip-flopping allows hikers to more easily customize their trips according to desired weather for certain parts of the trail and, since the A.T. is a bit easier in the middle, it gives them the opportunity to get their trail legs. There are other positives as well, including reducing the overall environmental impact of hikers all going in the same direction and at roughly the same time.

For the Quirins, this approach made a lot of sense. It gave Ellie time to get used to the long hikes but and gave Bekah and Derrick a chance to really get used to carrying Ellie on the trail. It was probably a big help when they scaled Blood Mountain, the highest peak in the Georgia portion of the A.T.

Another perk? As the summer wound down, the family headed north and avoided some of the heat and humidity in the Southeast and Chesapeake regions, definitely a plus when hiking with an infant strapped to your back.

According to the Quirins, Ellie took her first steps and uttered her first words along the trail. (“Other than mom, dad, and no- “backpack” is her most recognizable word! How appropriate,” the parents reported from the trail.) She played in creeks and on mountains. She imitated owls.

And, according to her parents’ Instagram posts, “We witnessed the pure joy she felt simply being a child in a spectacular and mesmerizing creation. We never missed any of it, not one single moment.”

According to her parents, she took long naps much of the way, happy to do so in the baby carrier. That means Bekah and Derrick could cover a lot of miles while Ellie slept. As for entertainment … what could be more entertaining than the constant variation of scenery along the trail?

The challenge that the Quirins were asked about most frequently is the diapers. The Quirins planned to double wrap the diapers in Ziplock bags and carry them (outside their packs) until they could dispose of them. Planning and packing, of course, was critical.

The Quirins are both in their mid-20s and very experienced with hiking (Derrick was a local outdoor guide in South Carolina), so they knew what they were getting into for this big adventure. And now, after more than 2,190 miles, they — and baby Ellie — know a lot more about what is possible.