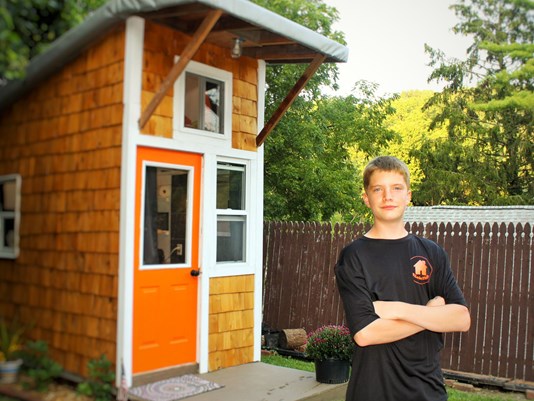 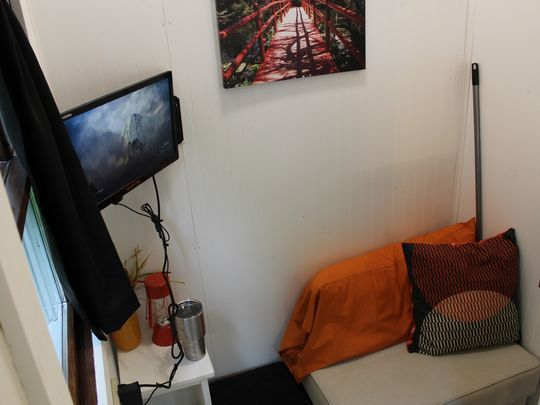 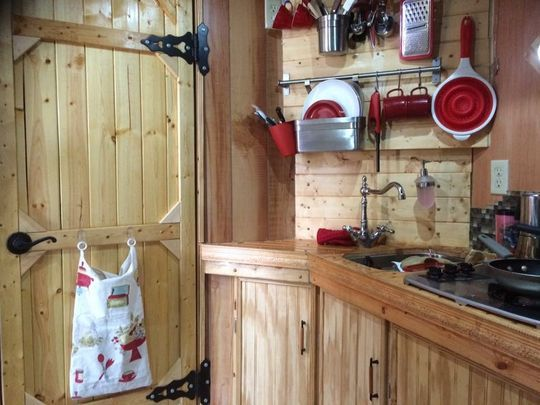 Luke Thill is 13 and built his own house.

He doesn’t consider it a playhouse, and neither did those who invited him to speak Saturday at a tiny home festival in Colfax, Iowa. The eighth-grader from Dubuque, Iowa, calls the 89-square-foot structure in his parents’ backyard a “starter home.” He built it for $1,500 by cutting lawns, raising money online, gathering reclaimed materials and bartering for labor.

An electrician neighbor helped him wire it — if Thill cleaned out his garage.

A Scout leader he knew helped him lay carpet in the loft bedroom — if he cut the man’s lawn.

He used leftover siding from his grandma’s house and a front door he got from his uncle’s friend.

“I liked the minimalism,” he said, sounding much older than 13. “And I wanted to have a house without a huge mortgage.”

Tiny homes less than 500 square feet have piqued the imagination of a nation fighting the American urge for more and bigger in the past decade, said Renee McLaughlin, the organizer of last weekend’s TinyFest Midwest, who lives in a smaller home than Thill’s. Her rural Oskaloosa home is 87 square feet. “I think we’ve reached a threshold where this ‘stuff’ is running our lives. We spend all our time working to buy it, clean it and organize it,” said McLaughlin, 48. “It’s not making us happy.”

Her fest at the Jasper County Fairgrounds included several tiny homes to tour, a presenter who is 6-foot-8, proving they can fit anyone, and attendees from 18 states, including a family of four who lives in a tiny home. It was Thill’s first speaking engagement after gathering attention and more than 700 subscribers with his YouTube series on the build.

Thill’s dad, Greg, told him when he started the project 18 months ago that if he was going to do it there were simple rules: You raise the money. You build it. And you own it. Greg Thill said he worked alongside his son to guide him, but that Luke learned much on his own — framing a structure and wiring, dealing with adults, making tough financial decisions and staying on budget.

“It was a chance for a kid to do something more than play video games or sports,” he said. “It teaches life lessons.”

Luke says his home, which is 5½ feet wide and 10 feet long and includes a loft, is made of 75 percent reclaimed materials, including several windows. He built a small deck outside. The siding is half cedar shakes, half vinyl Inside, a small kitchen area with a counter and shelving leads to a back sitting area with a large ottoman for a couch, a flip-down table and a wall-mounted TV. A ladder leads to an upstairs loft with a mattress. It’s wired for electric but has no plumbing, so Greg Thill says city codes consider it “a glorified shed.”

Luke Thill said he learned how to overcome disappointment. A big moment was his “counter-top fail.” He placed broken colored glass below what was going to be a lacquer surface. But when he poured the lacquer, it was “too watery,” and ran all over. But he made the most of it — the lacquer created a bond that held the counter to the wall. “Doesn’t have a screw in it,” he said.

He attached a traditional counter surface over the messed-up lacquer surface with a hinge for a lift-top storage space.He sleeps in it a couple of nights a week, does homework there after school and entertains friends. “The main purpose is to be my starter home,” he said. “I’m going to save money and expand.” In a couple of years, he hopes to build a larger tiny home on a trailer so he can perhaps haul it to college for cheaper living.

His message at the festival was this: “I want to show kids it’s possible to build at this age.”

There’s also an Iowan on the festival schedule who lives in a tiny home at the age of 80.

One trend is their ever-shrinking size — including micro-homes of fewer than 100 square feet, McLaughlin said. She sold her 3,300-square-foot home and 18 months ago moved into a space smaller than one of the four bathrooms in her former dwelling. How? She simply got rid of stuff — though clothes and shoes were the hardest. She shops less, buys less and throws less garbage into the landfill. A small bag that fits in a public trash can is all she tosses in a week. It fits her environmental ethic, which includes heating her water with solar. “I’m a simple girl, but a girl, nonetheless,” she said. So she accommodated her clothes problem with a hanging rod that swings into the shower.

While it sounds spartan, McLaughlin said people have gone from feeling sorry, telling her that “it will get better,” to saying that her home on wheels is cool. “I now own everything outright with no debt,” she said. “I can move around. It’s nice to know I can just go.” Her home sits on a relative’s property — that’s one of the issues with living in a tiny home: finding a piece of land to park it.

Despite widespread publicity fueled by reality TV shows, the growth of tiny homes is still difficult to quantify. The average new home continues to grow bigger — to 2,687 square feet in 2015, or a thousand square feet larger than in 1973. According to an analysis of homes on the Multiple Listing Service last fall by realtors.com, only 3,000 of the 1.5 million homes listed in the U.S. were tiny homes.

“A huge part of it tends to be secret. They may be living in a backyard under the radar,” said Jay Shafer, a keynote speaker at the festival, who is viewed by tiny home enthusiasts as the “godfather” of the movement.e started living in a 130-square-foot home in Iowa City nearly 20 years ago, and his story spread across the country. He now designs tiny homes in California. While inroads have been made to allow tiny home builders in the U.S. to finance and ensure the structures, city codes are still prohibitive. Many have foundation or size requirements. For example, Des Moines housing codes require a home to be at least 24 feet wide.

Shafer said there has been progress, pointing to the recent change in the International Residential Code, which now requires U.S. homes to be a mere 88 square feet in 2018.

“Everyone had to have a big house, and now people have changed and realized it’s not practical,” Luke Thill said. “You can save money, travel the world and do what you want instead.”