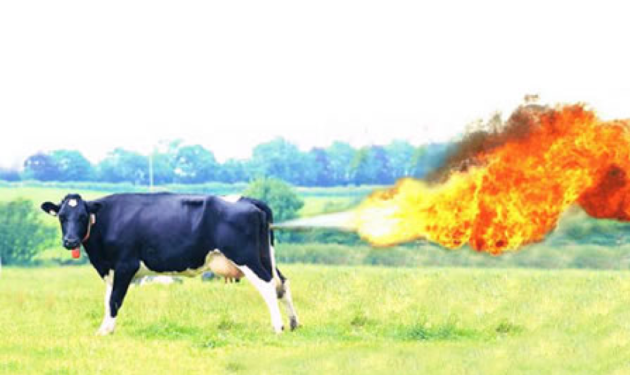 Do baboons fart? What about salamanders? Millipedes?

These questions sound like the sort Bart Simpson might have asked to derail science class. But real-life scientists are now taking to Twitter to provide answers. So far, they’ve created a hashtag — #DoesItFart — and a Google Spreadsheet that details the flatulence habits of more than 60 animals.

So, which animals cut the proverbial cheese? Tons, it turns out. Bats do, according to David Bennett, a PhD candidate at Queen Mary University of London. And the bigger they are, the harder they honk.

Rats, zebras and bearded dragons are also among Those Creatures That Fart. Birds, on the other hand, do not seem to have a biological need for passing gas, but they could let one rip, theoretically. Marine invertebrates such as oysters, mussels and crabs? Alas, they are whoopee-impaired.

The science of farts is not just about potty humor, by the way. Cattle gas, for example, is a significant contributor to atmospheric methane that contributes to climate change. And fauna flatulence is also a hot topic among certain crowds — ones scientists want to engage.

“Does it fart?” is one of most frequent questions zoologists receive from kids, said Dani Rabaiotti of the Zoological Society of London. In fact, the whole #DoesItFart adventure started when her teenage brother asked if snakes ever experience flatulence. Rabaiotti knew from her own work that the wild dogs of Africa definitely fart, as do the extremely gassy seals that reside on the Atlantic island of South Georgia. But she wasn’t sure about snakes, so she consulted snake expert David Steen.

The short answer is yes, says Steen, a wildlife ecologist at Auburn University. “Snakes sometimes discharge feces and musk as a defensive strategy, and this is often accompanied by what I would consider classic fart noises,” he said.

Steen said this is far from the first time he’s fielded this question, as it seems to be a favorite of the preteen crowd.

“I don’t know if animal flatulence questions can serve as a significant gateway to a greater appreciation of biodiversity, but it is always fun to see what captures people’s attention,” he said. “It is at least an opportunity to engage with a larger audience and bring new folks into the conversation.”

And if engagement is the goal — or at least a byproduct — does it really matter what the topic is? “Just because it’s flatulence doesn’t mean it’s inherently silly,” said Adriana Lowe, a researcher of biological anthropology at the University of Kent in the United Kingdom. “The diets and digestive systems of animals are an important and fascinating field of study, and gas is just a part of that.”

Lowe studies chimpanzees in Uganda’s Budongo forest, animals whose gas appears to vary with their diet. “Fruit is tootier than leaves, and figs seem to be the worst offenders,” she said. On occasion, these bodily functions have even aided in her research. “Several times I have been with one or two chimps and not been aware others are nearby until the farts start,” says Lowe. “Some of them have that very long, air-being-released-from-a-balloon quality, which is handy because it gives you a bit longer to pinpoint where it’s coming from.”

One thought on “Scientists are building an animal fart database”