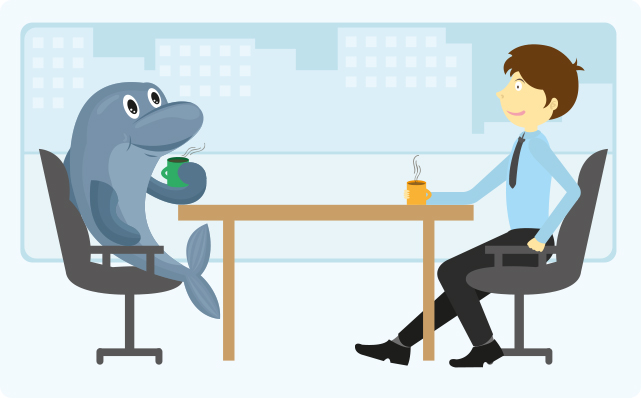 A conversation between dolphins may have been recorded by scientists for the first time, a Russian researcher claims.

Two adult Black Sea bottlenose dolphins, named Yasha and Yana, didn’t interrupt each other during an interaction taped by scientists and may have formed words and sentences with a series of pulses, Vyacheslav Ryabov says in a new paper.

Joshua Smith, a research fellow at Murdoch University Cetacean Research Unit, says there will need to be more research before scientists can be sure whether dolphins are chatting.

“I think it’s very early days to be drawing conclusions that the dolphins are using signals in a kind of language context, similar to humans,” he told CNN.

There are two different types of noises dolphins use for communication, whistles and clicks, also known as pulses.

Using new recording techniques, Ryabov separated the individual “non coherent pulses” the two dolphins made and theorized each pulse was a word in the dolphins’ language, while a collection of pulses is a sentence.

“As this language exhibits all the design features present in the human spoken language, this indicates a high level of intelligence and consciousness in dolphins,” he said in the paper, which was published in the St. Petersburg Polytechnical University Journal: Physics and Mathematics last month.

“Their language can be ostensibly considered a high developed spoken language.”

In his paper, Ryabov calls for humans to create a device by which human beings can communicate with dolphins.

“Humans must take the first step to establish relationships with the first intelligent inhabitants of the planet Earth by creating devices capable of overcoming the barriers that stand in the way of … communications between dolphins and people,” he said.

Smith said while the results were an exciting advance in the under-researched field of dolphin communication, the results first needed to be replicated in open water environments.

“If we boil it down we pretty much have two animals in an artificial environment where reverberations are a problem … It wouldn’t make much sense for animals (in a small area) to make sounds over each other because they wouldn’t get much (sonar) information,” he said.

“It would be nice to see a variety of alternate explanations to this rather than the one they’re settling on.”