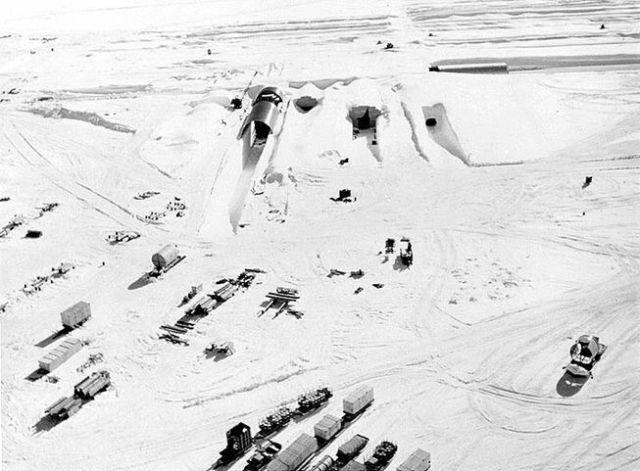 The army base at Camp Century in Greenland was abandoned in the ’60s, leaving behind buried toxic waste that may become exposed by the end of the century. (Photo: U.S. Army/Wikimedia Commons)

When the Cold War ended, much of the world breathed a huge sigh of relief. And while the immediate threat of nuclear armageddon may have faded, there are countless sites around the world that are still burdened with the toxic legacy of military superpowers.

As global climate change reshapes our world, at least one such site is in danger of becoming a more immediate problem.

As reported over at Scientific American, Camp Century in northwest Greenland was a U.S. military base abandoned in the mid-1960s. When American forces shipped out, they left behind literally thousands of tons of waste buried deep inside tunnels that were dug out of the thick, year-round ice. Not unreasonably — given that the tunnels were 120 feet below the surface, and that fresh snow fell every year to bury the tunnels ever deeper — an assumption was made that the waste would remain buried for tens of thousands of years. But we all know what they say about assumptions…

With the rapid rate of Greenland’s ice melt (which CNN reports is off to a record start this year), concerns are surfacing that the buried waste — which includes everything from radioactive coolant to toxic PCBs — will be exposed much sooner than previously thought. A new study led by glaciologist William Colgan of York University in Toronto suggests that while cleaning up the site will have to wait until melting brings it closer to the surface, now would be a good time for world powers to start thrashing out who is responsible for such long abandoned waste materials.