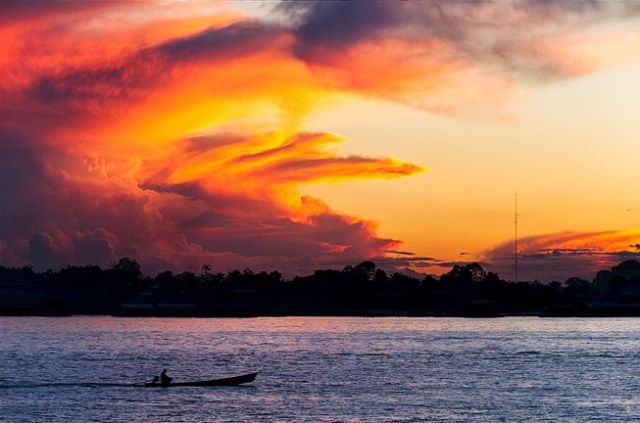 Coral reefs are sometimes called the rain forests of the sea due to their immense biodiversity. Like rain forests, they’re typically found in the tropics, and because they usually thrive in clear, turquoise waters, they make for accessible attractions for divers, snorkelers, and researchers alike.

Reefs don’t usually like to form in muddy waters, such as at mouths of rivers — or so we used to think. But a remarkable new discovery in the Amazon could rewrite the book on coral reef biology. There, in the murky waters at the mouth of the Amazon River, scientists have found a massive, thriving coral reef that stretches from the French Guiana border to Brazil’s Maranhão State, an area covering about 3,600 square miles, reports The Smithsonian. That’s larger than the state of Delaware.

How did such a natural spectacle remain hidden from science until now? Well, as noted, scientists don’t usually think to look for coral reefs in muddy waters. Also, the Amazon has the largest discharge of any river in the world, so the waters at its mouth are more than murky — they’re downright thick and soupy.

Still, it’s incredible to discover such a massive new ecosystem like this in modern times. Scientists are giddy at the thought of the number of new creatures — animals that have evolved to thrive uniquely in this unexpected environment — that might soon be discovered here.

“This is something totally new and different from what is present in any other part of the globe,” said oceanographer Fabiano Thompson. “But until now, it’s been almost completely overlooked.”

“You wouldn’t expect to have gigantic reefs there, because the water is full of sediment and there’s nearly no light or oxygen,” added Thompson.

Researchers have already found at least 29 specimens of sponges that likely constitute new species. Strange microbes that seem to base their metabolism not on light but on minerals and chemicals such as ammonia, nitrogen and sulfur are also plentiful in early samples. This unconventional form of life could help explain how the creatures that live among this reef manage to survive.

So far, only a small fraction of the new habitat has been mapped, and it may have been discovered in the nick of time, seeing as oil and gas companies are rapidly expanding into the region for potential drilling. Discovering this unique reef system here will hopefully lead to protections that will help preserve it before it can be irreparably damaged.