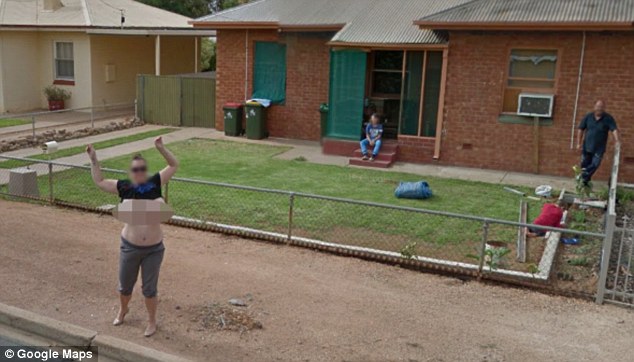 Karen Davis was photographed on Google Street View flashing her breasts.
Police reported her for disorderly behaviour and she must report to court.
Police said her ‘actions were the same as someone flashing their genitals.’
SA country town mum hit back at critics saying they are insecure.
She plans to do a topless skydive for her 40th birthday next year.

A woman who notoriously flashed her K-cup breasts on Google Street View has been charged by police with disorderly behaviour.

Karen Davis, from Port Pirie in South Australia, was captured streaking by a camera car for the popular Google Maps app, which allows users to zoom in on certain streets and towns in cities all over the world with a 360-degree view.

Police released a statement alleging the 38-year-old mother ‘pursued’ the Google car to make sure she was captured exposing herself, and that it was an illegal act.

‘The woman’s actions were the same as someone flashing their genitals and the public expectation is that we take action,’ said Superintendent Scott Denny of Port Pirie police.

‘Recently in Port Pirie we arrested a man for exposing himself in public – this incident is no different,’ he said.

‘It is not appropriate for anyone to expose themselves in public places. Our community should be able to expect a bit of decency.’

Ms Davis will be summonsed to appear in the Port Pirie Magistrates Court at a date to be determined.

In the image, Ms Davis can be seen holding her arms up in the air with her T-shirt hunched up around her neck bearing her breasts, as she follows the Google camera cars around the street.

Her sons are playing in the background and an unknown man stands at the fence watching.

Across the road, a neighbour is lounging on her outdoor furniture, watching the whole thing unfold.

The 38-year-old, who plans to skydive topless for her 40th birthday, has hit back at the controversy over her actions, claiming that ‘flat-tittie chicks’ are not confident enough with their own bodies and should focus on how they look.

Speaking to Daily Mail Australia, Ms Davis was in tears over the nasty comments coming from her community after she was branded a ‘bad mother’ and ‘pure filth’ for her raunchy behaviour.

‘They are narrow-minded people who are not happy with their own bodies,’ she said.

Posting on her Facebook account, Ms Davis addressed the fact that she pursued the car through Barry Street in Port Pirie until they got the perfect shot and believes locals are jealous of her antics.

‘Haters hate, you got the guts to do it?’ she posted on Facebook after the photo went public.

‘All the flat-tittie chicks think I am disgusting. Big-boob envy has hit Port Pirie.’

Taking to Facebook, disgusted commenters attacked Ms Davis’ parenting skills after it became clear that her two sons were in the background of the picture.

‘I’m sure your children will be proud of their mother that is probably going to cause them a lot of embarrassment,’ one Facebook commenter said.

‘Oh goodness. Can’t even begin to imagine how her children are feeling,’ another user said.

However a select few came out in support of Ms Davis’s show on Google Maps.

‘Let her go, she’s having some fun, Pirie people need to lighten up a bit. if more lovely ladies would get them out more often the world would be a much happier place,’ one commenter said.

Ms Davis told Daily Mail Australia that she thought the act would be funny and that it was an item she has now ticked off her bucket list.

She also said that she has a friend in the United Kingdom and she thought it would brighten up his day if he saw the image online.

‘I have a friend in the UK. If he looks on there he will smile,’ she said.

Ms Davis wasn’t sure that the photo would make it on to Google Maps but she said she is delighted that it did.

‘I think maybe some need to start their own bucket list and leave mine alone,’ she said.

She also revealed that since the photo has been released she has attracted a whole host of new friend requests on Facebook.

Many young men have tried to befriend her but she has not accepted any of them.

Ms Davis said she has only learnt to embrace her size-K breasts in the last few years after spending her youth hiding them away.

‘I always got picked on and it wasn’t until late in my 20’s that I became confident in myself,’ she said.

She also revealed that she has to buy her bras online from the UK as they do not make size-K bras in Australia.

‘It would be nice if they made my size bra in Australia,’ she said.

Ms Davis said that she would do it all again, even considering the backlash the image has received.

‘When you point your finger at me, you have 4 pointing back at yourself.’

Some people online have suggested that she should be formally charged for her display but she has contacted the police who have confirmed that they have ‘no concerns’.