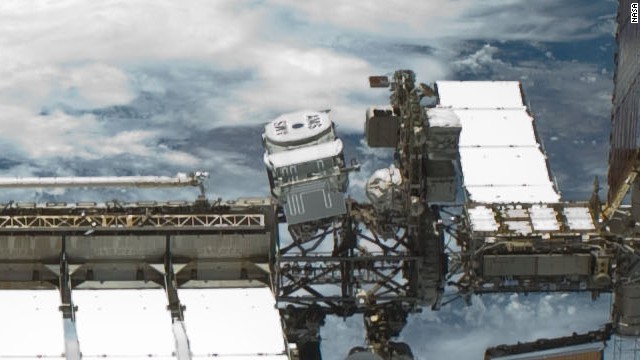 Take a look around you, and in your mind’s eye, randomly wipe out all but a small fraction of what you can see. Pretend the vast rest of reality is there but invisible.

You’d probably like a device that helps you see much more of it.

Scientists working at CERN, the European Organization for Nuclear Research, have made some progress in that direction with the Alpha Magnetic Spectrometer (AMS), which has been riding aboard the International Space Station since 2011.

Physicists believe that mental exercise in blindness reflects the reality of our universe, only about 4% of which manifests as the kind of matter and energy we can perceive.

More than 70% consists of so-called dark energy, physicists say, and more than 20% is dark matter, neither of which humans can directly detect so far.

But scientists feel certain it must exist, partly because of the gravity it exerts on the visible universe.

This week, CERN scientists published an analysis of data from the AMS, which detects subatomic particles constantly bombarding Earth. They include exceedingly rare antimatter particles that can result from the breakdown of dark matter.
They are called positrons, also known as anti-electrons. They have the same mass as electrons, but electrons have a negative charge, and positrons have a positive charge.

Scientists believe dark matter collides, splitting into pairs of electrons and positrons, so the ability to examine positrons in detail could help in proving the existence of dark matter.

Positrons are produced in minute quantities in our corner of the universe, and mostly come flying our way from its far reaches, bundled up with gangs of other subatomic particles, mainly protons and electrons.

The flying particles bear the name “cosmic rays,” a misnomer given to them at a time when they were not as well understood.

The AMS project has analyzed 41 billion cosmic ray particles, and determined 10 million of them to be made of electrons and positrons.
There have been fluctuations in the number of positrons in the mix, and thanks to the orbiting spectrometer, for the first time in a half-century of cosmic ray research scientists have been able to measure an important peak in positrons.

“AMS now unveiled data that no other experiment could ever record,” said CERN spokesman Arnaud Marsollier.

The data hint at the existence of dark matter. But CERN scientists are not completely sure yet that dark matter is the true source of the positrons.

“It may come from high-energy phenomena somewhere in our universe: But what?” Marsollier asks. “Pulsars? Supernovas?”

Pulsars are stars similar to black holes that spray particles and light through the universe. Supernovas are exploded former stars.

Because it detects particles as opposed to light, the way a telescope would, AMS may also be able to see other cosmic phenomena a telescope cannot.

The data released this week need more study, but at first glance, CERN says, what they have seen so far looks “tantalizingly consistent with dark matter particles.”

If that’s the case, the AMS may have begun to remove humanity’s greatest blindfold.