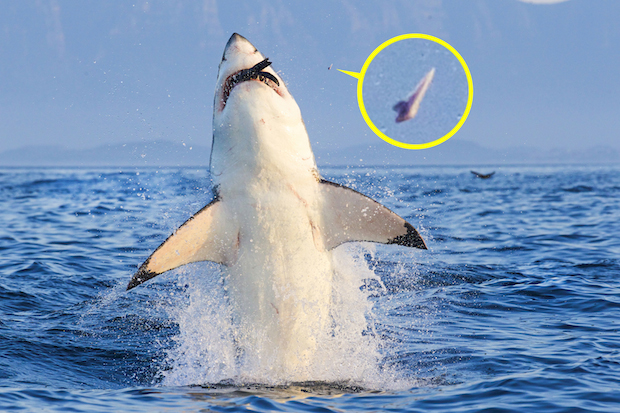 A photographer off South Africa recently captured the moment a large great white shark breached the surface during an ambush attack on an unsuspecting seal.

What he soon found out was that in one of his images was a large triangular-shaped tooth, flying through the air.

Not a big deal for the shark. Great whites possess the ability to replace lost teeth rather quickly, and may lose more than 35,000 teeth in a lifetime.

But it was a huge deal for the photographer, David Jenkins, because his rare image reveals more about the dynamics of a white shark’s ambush attack.

“It all happened incredibly quickly,” he told the Daily Mail. “I didn’t know the shark had lost its tooth until I zoomed in on the image in the back of my camera to check if the photo was sharp and in focus.

“I have never seen this happen or even seen a photo of this happening on a real seal hunt before. It’s definitely a unique shot.”

The waters near Cape Town boast a large population of great white sharks, which sometimes launch airborne during their attacks.

Thanks to Pete Cuomo to bringing this to the attention of the It’s Interesting community.