Instead of a dunce cap in the corner, an Ohio woman will have to wear an “idiot” sign at an intersection as punishment for driving on the sidewalk.

Shena Hardin, 32, was caught on a cellphone camera as her car swerved onto the sidewalk to get around a bus picking up and dropping off children on East 38th Street in Cleveland. The bus driver was recording and police were ready because Hardin allegedly passed the bus on the sidewalk on a regular basis.

She originally pleaded not guilty to charges of not stopping for a school bus, which was picking up a disabled child, and reckless operation of a vehicle but was convicted.

She received a $250 fine and a 30-day licence suspension, according to the report.

The judge also ordered Hardin to stand on a street near where the offence took place for an hour a day for 2 days wearing a sign that reads: Only an idiot drives on the sidewalk to avoid a school bus.” 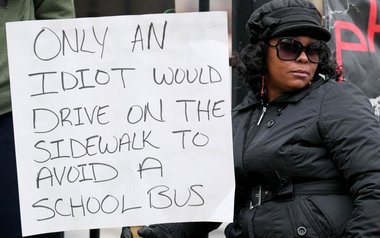 On the first day she smoked, listened to music and sent text messages while standing with the sign.

The next morning, Hardin was not smoking or texting while holding the 22-inch sign that reads, “Only an idiot would drive on the sidewalk to avoid a school bus.”

And a radio station personality stood beside her with a sign that read, “If she’s an idiot, so am I.” Archie Berwick, who said he is with WLFM FM/87.7, said everyone has made mistakes, and it’s insulting to call someone an idiot.

Dozens of reporters and onlookers milled around the corner, including the mother of a child who rides the bus Hardin drove around.

“She did it every morning, putting my daughter in danger,” Lisa Kelley said. “She’s a fool.”

Hardin refused to talk to reporters and refused to apologize for her behavior.

“I don’t owe these people anything,” she said. “If the kids (who were on the school bus she illegally passed) were here, I would apologize to them.”

The rest of the hour the woman stood holding the sign, as dozens of people stopped their cars and took pictures and videos. Many called her “fool” and cursed at her.

Carr said Tuesday, “I saw television footage of her smoking and texting, and the only time she held that sign up was to use it as a shield to block the wind so she could light up her cigarettes. She was making a mockery of my court order.”

Hardin works as an administrative assistant at the Cleveland State University Police Department.