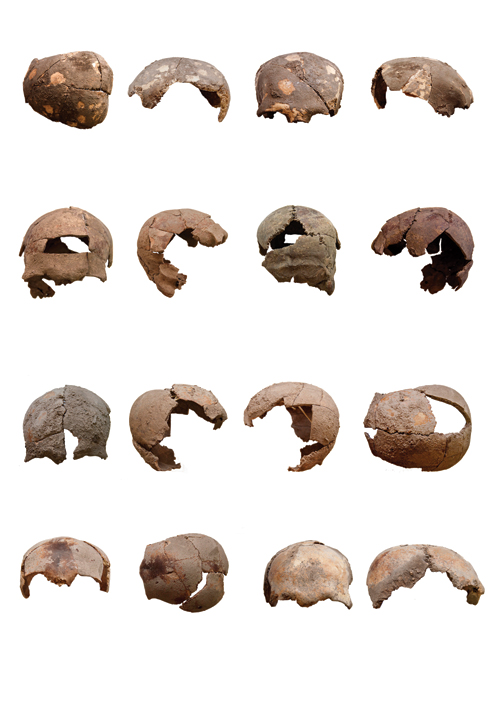 An unusual cluster of Stone Age skulls with smashed-in faces has been found carefully separated from the rest of their skeletons. They appear to have been dug up several years after being buried with their bodies, separated, then reburied. Although collections of detached skulls have been dug up at many Stone Age sites in Europe and the Near East – but the face-smashing is a new twist that adds further mystery to how these societies related to their dead.

Juan José Ibañez at the Spanish National Research Council in Barcelona says the find may suggest that Stone Age cultures believed dead young men were a threat to the world of the living.

No one knows why Neolithic societies buried clusters of skulls – often near or underneath settlements. Some think it was a sign of ancestral veneration. “When people started living together [during the Neolithic period], they needed a social cement,” says Ibañez. Venerating ancestors might have been a way of doing this. But the violence demonstrated towards the skulls in the latest cluster suggests a different story.

The 10,000-year-old skulls were found in Syria. Like those found in other caches, they have been cleanly separated from their spines, suggesting they were collected from dead bodies that had already begun to decompose. Patterns on the bone indicate that some had been decomposing for longer than others, making it likely that they were all gathered together for a specific purpose.

Most of the skulls belonged to adult males between 18 and 30 years old. One – belonging to a child – was left intact; one was smashed to pieces; the remaining nine lacked facial bones. “There was a pattern,” says Ibañez. “The top of the skull and the jaw were there, but they were missing all of the bones in between.” His team believes the facial bones were smashed out with a stone and brute force. “There were no traces of cutting,” he says (American Journal of Physical Anthropology, DOI: 10.1002/ajpa.22111).

Ibañez reckons Stone Age people believed they would receive some benefit – perhaps the strength of the young men the skulls once belonged to – by burying them near or beneath their settlements. Why the faces were smashed in invites speculation.

It may have been an act of spite or revenge, says Ibañez. Or the skulls may have been brought together to create a “community of the dead”, perhaps in order to spiritually interact with the living.

“The post-mortem violence suggests young men were seen as carrying a particular threat,” says Stuart Campbell at the University of Manchester, UK. Destroying their facial structures may have been a way of destroying the individuals’ identities, he says.

Liv Nilsson Stutz at Emory University in Atlanta, Georgia, says the act could have helped deal with grief. “Taking away facial identity could be a way of separating the dead from the living,” she says.