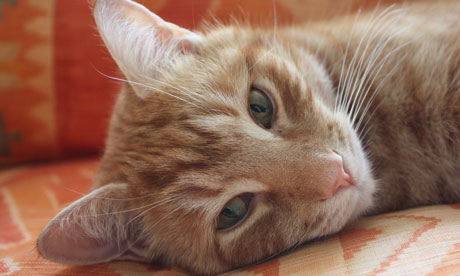 The Observer’s panel of stock-picking professionals has been undone in our 2012 investment challenge by a ginger feline called Orlando who spent time paw-ing over the FT.

Each team invested a notional £5,000 in five companies from the FTSE All-Share index at the start of the year. After every three months, they could exchange any stocks, replacing them with others from the index.

While the professionals used their decades of investment knowledge and traditional stock-picking methods, the cat selected stocks by throwing his favourite toy mouse on a grid of numbers allocated to different companies.

The challenge raised the question of whether the professionals, with their decades of knowledge, could outperform novice students of finance – or whether a random selection of stocks chosen by Orlando could perform just as well as experienced investors.

“It’s time to crack open the Whiskas,” said a good-humoured Justin Urquhart-Stewart. “The cat’s got talent.” To celebrate his success, Orlando’s owner, former Cash editor Jill Insley, has bought him a red collar in the style of Urquhart-Stewart’s omnipresent red braces.

All but one of Orlando’s stocks (Morrisons) rose during the last three months of the year, including specialist plastics and foam company Filtrona, which Orlando had hastily swapped for under-performing Scottish American Investment Trust in September.

By contrast, the professionals refused to swap any stocks at the end of the third quarter and paid the price. British Gas fell by 19% and Imagination Technologies dropped by 16.8%, dragging their portfolio down by an average 7.1%.

The students may have finished last, but displayed the best performance of all the teams in the final quarter, their portfolio increasing by an average 5.4%, including a fantastic performance of 17.4% for property company Savills.

Their trading decisions were key: at the end of the final quarter they swapped Mulberry for Aviva and Betfair for Tesco. In the final quarter, Aviva’s share price increased by 17% (compared with a rise of only 6.6% for Mulberry during that time) and Tesco rose by 1.2% (far superior to a fall in the Betfair share price of 5.4%).

Nigel Cook, deputy headteacher at John Hoddesdon School, said: “The mistakes we made earlier in the year were based on selecting companies in risky areas. But while our final position was disappointing, we are happy with our progress in terms of the ground we gained at the end and how our stock-picking skills have improved.”

A spokeswoman for Orlando said he was not available to give an interview because of a claws in his contract.