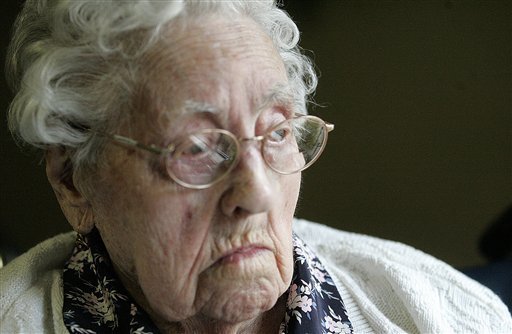 This file April 2010 photo shows Dina Manfredini of Johnston, Iowa. Manfredini, who inherited the title of world’s oldest person less than two weeks ago, died Monday, Dec. 17, 2012, at age 115, her granddaughter Lori Logli said. She did not elaborate on the cause of her grandmother’s death. Manfredini was born on April 4, 1897, in Italy, according to Guinness officials. She moved to the United States in 1920 and settled in Des Moines with her husband.

A 115-year-old Iowa woman’s granddaughter says the woman has died less than two weeks after inheriting the title of world’s oldest person.

Guinness spokesman Robert Young says a Japanese man is believed to now hold the title. Jiroemon Kimura was born on April 19, 1897, which makes him just 15 days younger than Manfredini. Young says Kimura, of Kyotango in Kyoto, also is believed to be the second-oldest man in documented history.