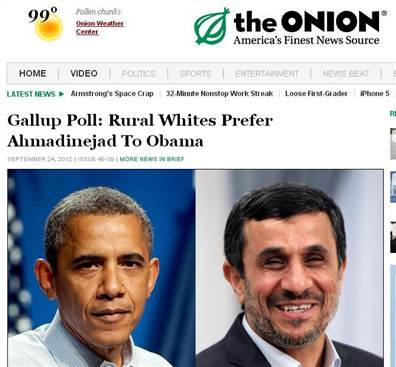 A joke by the satirical website The Onion appears to have gotten lost in translation.

An Iranian news agency picked up — as fact — a story from the paper about a supposed Gallup survey showing an overwhelming majority of rural white Americans would rather vote for Iranian President Mahmoud Ahmadinejad than President Barack Obama. But it was made up, like everything in the just-for-laughs newspaper, which is headquartered in Chicago.

The English-language service of Iran’s semi-official Fars news agency republished the story Friday, several days after it appeared in The Onion.

The Iranian version copied the original word-for-word, even including a made-up quote from a fictional West Virginia resident who says he’d rather go to a baseball game with Ahmadinejad because “he takes national defense seriously, and he’d never let some gay protesters tell him how to run his country like Obama does.”

Homosexual acts are punishable by death in Iran, and Ahmadinejad famously said during a 2007 appearance at Columbia University that “in Iran we don’t have homosexuals like in your country.”

The Iranian version of the article leaves out only The Onion’s description of Ahmadinejad as “a man who has repeatedly denied the Holocaust and has had numerous political prisoners executed.”

The article was featured prominently on the Fars website alongside its usual fare of stories about advances in Iranian military technology, condemnation of Israel and Iran’s nuclear program. The story appeared to have been taken down by about mid-day Friday, Chicago time.

Calls to Fars representatives were not answered Friday.

The Onion reveled in the fact that it had been taken seriously.

Onion editor Will Tracy put out a tongue-in-cheek statement that referred to Fars as “a subsidiary of The Onion” that has acted as the paper’s Middle Eastern bureau since it was founded in the mid-1980s by Onion publisher T. Herman Zweibel.

“The Onion freely shares content with Fars and commends the journalists at Iran’s Finest News Source on their superb reportage,” Tracy said in jest.

It’s not the first time a foreign news outlet has been duped by The Onion. In 2002, the Beijing Evening News, one of the Chinese capital’s biggest newspapers, picked up a story from The Onion that claimed members of Congress were threatening to leave Washington unless the building underwent a makeover that included more bathrooms and a retractable dome.