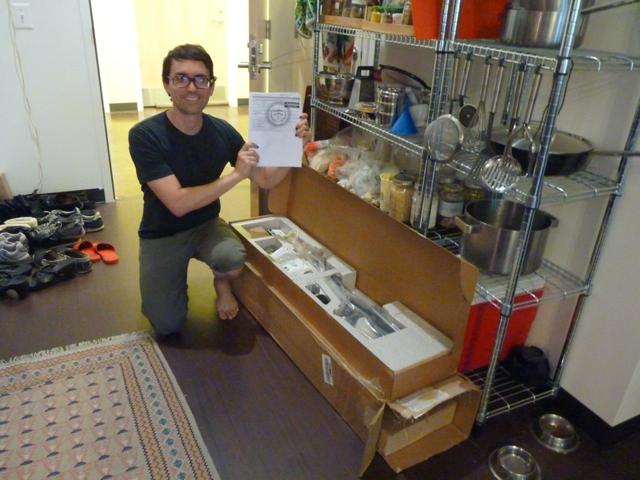 Seth Horvitz, a Northeast D.C. resident, thought he had ordered a new high-definition television a few days ago through Amazon.com from a third-party merchant. When the package arrived yesterday, however, Horvitz opened the oddly shaped box to find something completely different.

Instead of the flat-panel TV he had bought to enjoy with his wife, who is pregnant, Horvitz opened the long packaging to discover a Sig Sauer SIG716, a high-caliber, semi-automatic assault weapon capable of mowing down, well, just about anything. Its manufacturer, Swiss Arms AG, describes it as “the rifle of choice when you require the power of a larger caliber carbine.” Awesome.

Not surprisingly, Horvitz and his wife, Seeta, were shocked to find a gun instead of the television they thought they had ordered. They called the Metropolitan Police Department right away. David Cole, a friend of Horvitz’s said that Seeta’s reaction was “basically ‘get that out of here now.’ ”

The District’s gun laws might have slackened in recent years, but assault weapons are still verboten, as is transporting them into or through the District. That’s why Horvitz had to call the police; it would have been illegal for him to pack it in his car and take it back to UPS for a return shipment. MPD officers confiscated the gun and are investigating why it wound up in a Northeast D.C. apartment building rather than the Pennsylvania gun shop it was intended to reach.

The box was dropped off in the hallway outside yesterday afternoon, with a 7.6 pound, 37-inch-long rifle sitting inside. The SIG716 carries a suggested retail price of $2,132.

“[Police] were a little confused at first, they’ve never seen anything quite like it,” Horvitz told Fox 5 last night.

Also, it’s not a television.

UPDATE, 10:45 a.m.: Ty Rogers, an Amazon spokesman, declined to say what the company is doing to remedy the situation.

RELATED: Our interview with Seth Horvitz.