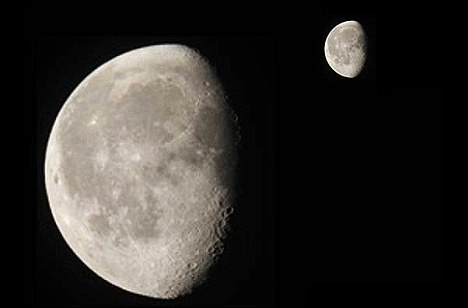 With mountain ranges topping 3,000 metres (10,000 feet) and deep craters, the farside of the Moon bears scant resemblance to the smoother surface and shallow lava-filled maria, on the nearside visible from Earth.

Scientists have hypothesized many explanations, such as uneven tidal heating (process by which energy from rotation and orbit deform a planet’s outer crust) or lopsided bombardment by asteroids.

Researchers from the University of California at Santa Cruz, Martin Jutzi and Erik Asphaug, however, have now published a new theory in Nature.

The Moon is thought to be composed of the debris cast off by a collision between Earth and a Mars-sized body over 4 billions years ago, an event called the giant-impact hypothesis.  This impact probably created other, smaller, moon-like bodies as well.  As our solar system evolved toward its current configuration, none of these lesser orbs were likely to have survived very long — unless they landed in a sweet spot called an Earth-Moon Trojan point.

Jutzi and Asphaug have calculated that at least one such mini-moon, about a third the diameter of the one we see today, could have been suspended between the gravitational pulls of the Moon and Earth for tens of millions of years.  Eventually, however, it would have lost its moorings and crashed into the Moon.  At high speed, planet-scale collisions create monstrous craters and vast amounts of vaporised debris.  However, the mini-moon, due to its position, would have been moving at a much slower speed — about two-to-three kilometres per second — and the impact would have left a rim of mountains.

Read about it here:  http://posttrib.suntimes.com/news/6866333-418/earths-two-moons-not-lunacy-but-new-theory.html

Thanks to Mr. C for bringing this to the attention of the It’s Interesting community.