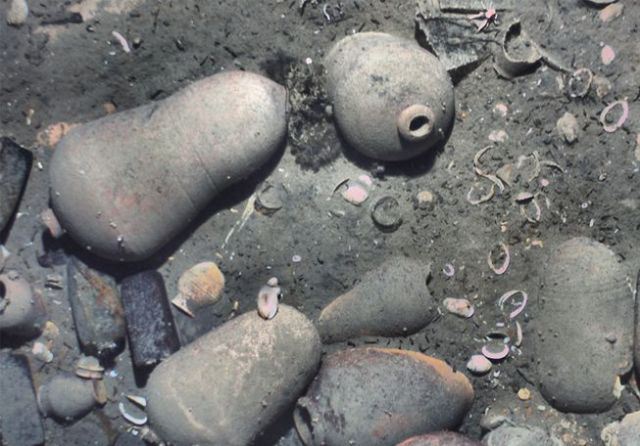 The sinking of the San José as depicted in a 1772 landscape by British painter Samuel Scott. (Photo: Samuel Scott) 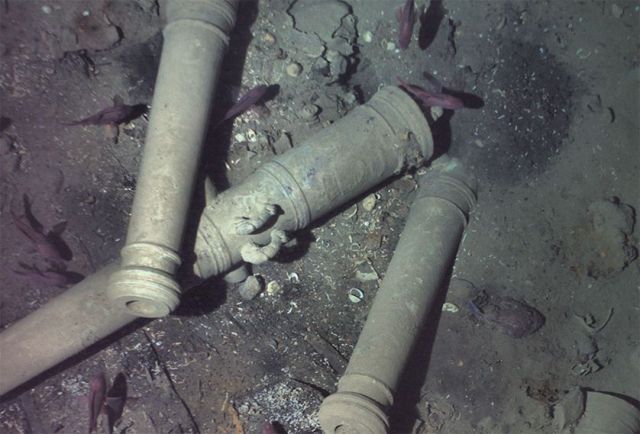 The decorative carvings on these cannons allowed researchers to confirm the wreck as the remains of the San José. (Photo: REMUS image, Woods Hole Oceanographic Institution)

The wreck of the San José, a long-lost treasure galleon of the Spanish Navy, has finally been located off the coast of Colombia.

The Woods Hole Oceanographic Institution (WHOI), with permission from the Colombian government, made the announcement of the discovery earlier this week, adding that the wreck’s final resting spot has been a closely guarded secret for almost three years.

“We’ve been holding this under wraps out of respect for the Colombian government,” Rob Munier, WHOI’s vice president for marine facilities and operations, told the AP.

Part of the Spanish treasure fleet, the San José was a 64-gun, three-masted galleon built in 1698 and tasked with shipping vast quantities of gold, silver, emeralds and jewelry from the South American colonies to Spain. On June 8, 1708, the vessel was sailing with the treasure fleet when it was ambushed by a British squadron off Colombia. During the battle that ensued, the San José’s powder magazines detonated, destroying the ship and taking an estimated $17 billion in previous metals and gems to the bottom of the sea.

Of the 600 people aboard, only 11 survived the sinking.

According to the WHOI, the final resting spot of the San José was finally discovered more than 300 years later at an undisclosed site off the coast of Cartagena, Colombia, on Nov. 27, 2015. An international team of scientists and engineers located the wreck at a depth of some 2,000 feet using side sonar and an autonomous underwater vehicle called REMUS 6000. The vehicle, which also mapped the wreck of the Titanic in 2010, was able to provide positive identification of the San José by locating and photographing the legendary vessel’s distinctive cannons.

“The wreck was partially sediment-covered, but with the camera images from the lower altitude missions, we were able to see new details in the wreckage and the resolution was good enough to make out the decorative carving on the cannons,” WHOI engineer and expedition leader Mike Purcell said in a statement. “MAC’s (Maritime Archaeology Consultants) lead marine archaeologist, Roger Dooley, interpreted the images and confirmed that the San José had finally been found.”

While the WHOI or any of the other participating agencies did not reveal whether any of the gold, silver, or emeralds the San José was carrying was detected, the images captured by REMUS do show several cannons, tea cups, and ceramic jugs littering the wreck site.

Should Colombia successfully excavate the site, the WHOI says the government is planning on building a “a museum and world-class conservation laboratory” to preserve and publicly display the wreck’s contents.

“We are pleased to have played a part in settling one of the great shipwreck mysteries for the benefit of the Colombian people and maritime history buffs worldwide,” WHOI Vice President for Marine Facilities and Operations Rob Munier said in the same statement. “We look forward to our continued involvement to answer the basic oceanographic research questions associated with the find.”

The recent nor’easter that struck the eastern coast of the U.S. last week revealed something on a New England beach that has been glimpsed only about once a decade for the last 60 years: the remains of a shipwreck that could date back to the Revolutionary War era.

Receding waters sucked away by the storm at Short Sands Beach in York, Maine, exposed the shell of the vessel, which a member of the York Maine Police Department photographed during a morning run and shared on Facebook yesterday (March 5).

The wreck is thought to be at least 160 years old; it was first glimpsed in 1958, but it wasn’t examined and identified until another storm uncovered it in 1980, when a team of archaeologists determined that it was a “pink” — a type of flat-bottomed, highly maneuverable sloop — built during the Revolutionary War era and commonly used for fishing or cargo transport, the website Seacoastonline.com reported.

Usually, the boat is submerged under 6 or 7 feet (1.8 to 2.1 meters) of water, and it was last exposed by storms in 2007 and then in 2013, according to the Boston Globe. Last week’s “bomb cyclone” revealed not only the ribs of the boat, but part of its underside as well.

The shipwreck’s historical significance has been noted by the Maine Historic Preservation Commission, which mapped the crumbling boat frame and identified the area as an archaeological site, Seacoastonline reported in 2007.

“A major dig would be a useful and interesting thing to do — probably just to look in more detail at the ship’s structure and construction, since small artifacts and cargo are probably gone,” Arthur Spiess, a senior archaeologist with the Maine Historical Preservation Commission, told Seacoastonline.

However, this shipwreck is one of 67 wrecks in the area, and limited local resources mean that there are as yet no plans for its excavation, according to the website.

In 1963, Col. Gordon Cooper, one of NASA’s original seven astronauts, spent a record-setting 34 hours in orbit around the planet. While the official purpose of his mission was to study the effects of prolonged weightlessness on the human body, the U.S. government was also interested in what his eyes could tell them. To that end, they tasked Cooper with taking thousands of photos using long-range detection equipment to search for possible Soviet nuclear sites near U.S. shores.

Long before online programs like Google Maps could give us all eyes on the planet, Cooper’s perspective on Earth afforded him an unprecedented opportunity to see objects not possible otherwise. And this is how, while cruising over the clear waters of the Caribbean, he started noticing some strange underwater anomalies. In fact, during his time in space, he photographed over a hundred of these shallow water sites, later deducing that they could only be shipwrecks.

In the decades that followed, using the notes and images from his orbital mission, Cooper created a treasure map pointing the way to some of these sites — a treasure map, that by all accounts, came from space.

Cooper, who passed away in 2004, never acted on the map he created. In the years before his death, however, he shared both his research and the map with a longtime friend, Darrell Miklos. A professional treasure hunter by trade, Miklos decided to honor the memory of his boyhood idol and hero and see if Cooper’s space map really could point the way to sunken riches. To help fund the expedition, he smartly pitched the hunt to a production company and subsequently managed to catch the attention of the Discovery Channel.

“I get to pay homage to a hero whom I considered to be my surrogate father,” he said during a television press panel. “I get to tell a story and finish a project or several projects that we were never able to finish together.”

Premiering on Discovery this month, the series “Cooper’s Treasure” follows Miklos and his team as they comb through Cooper’s documents and scour the Caribbean to reveal first-hand the locations spotted from space. According to executive producer Ari Mark, watching the puzzle pieces fall into place has been a fascinating experience.

“It starts to unravel and when you learn about who Gordon was … it starts to connect, and it did for us,” he said.

While Miklos has yet to reveal if any of wrecks on Cooper’s map have led to sunken treasure, his Gemini Marine Exploration company, founded in 2014, does mention that the firm is currently engaged with “several promising projects in the Caribbean.” Some of those wrecks, he tells ABC, could even turn out to be part of a lost fleet belonging to Christopher Columbus.

“This one wreck site right here would be worth well over $500 million,” he says in a clip.

You can tune in on April 18 on the Discovery Channel to see if the first treasure map from space delivers on potential riches.