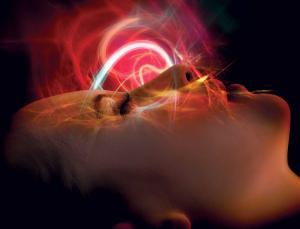 Could a futuristic society of humans with the power to control their own biological functions ever become reality?

It’s not as out there as it sounds, now the technical foundations have been laid. Researchers have created a link between thoughts and cells, allowing people to switch on genes in mice using just their thoughts.

“We wanted to be able to use brainwaves to control genes. It’s the first time anyone has linked synthetic biology and the mind,” says Martin Fussenegger, a bioengineer at ETH Zurich in Basel, Switzerland, who led the team behind the work.

They hope to use the technology to help people who are “locked-in” – that is, fully conscious but unable to move or speak – to do things like self-administer pain medication. It might also be able to help people with epilepsy control their seizures.

In theory, the technology could be used for non-medical purposes, too. For example, we could give ourselves a hormone burst on demand, much like in the Culture – Iain M. Banks’s utopian society, where people are able to secrete hormones and other chemicals to change their mood.

Fussenegger’s team started by inserting a light-responsive gene into human kidney cells in a dish. The gene is activated, or expressed, when exposed to infrared light. The cells were engineered so that when the gene activated, it caused a cascade of chemical reactions leading to the expression of another gene – the one the team wanted to switch on.

Next, they put the cells into an implant about the size of a 10-pence piece or a US quarter, alongside an infrared LED that could be controlled wirelessly. The implant was inserted under the skin of a mouse. A semi-permeable membrane allowed vital nutrients from the animal’s blood supply to reach the cells inside.

With the mouse part of the experiment prepared, the team turned to the human volunteers. Eight people, wearing EEG devices that monitored their brainwaves, were taught how to conjure up different mental states that the device could recognise by their distinctive brain waves.

The volunteers were shown meditation techniques to produce a “relaxed” pattern of brainwaves, and played a computer game to produce patterns that reflected deep concentration. They also used a technique known as biofeedback, in which they learned by trial and error to control their thoughts to switch on a set of lights on a computer.

By linking the volunteer’s EEG device to the wireless LED implant in the mouse, they were able to switch on the LED using any of the three mental states. This activated the light-responsive gene in the kidney cells, which, in turn, led to the activation of the target gene. A human protein was produced that passed through the implant’s membrane and into the rodent’s bloodstream, where it could be detected. “We picked a protein that made an enzyme that was easy to identify in the mouse as a proof of concept, but essentially we think we could switch on any target gene we liked,” says Fussenegger.

The possibilities this could open up extend as far as your imagination. For example, the implant cells could produce hormones, so how about giving yourself a burst of oxytocin before a stressful social event – just by concentrating on a computer game?

That’s possible in principle, Fussenegger says, but for now his team is focused on creating a device to help people who are locked-in, or those with chronic pain, medicate themselves. For people with epilepsy, a similar device could potentially pick up the specific electrical patterns that appear in the brain just before a seizure. It might be possible to engineer cells to react to this pattern and release drugs to lessen the seizure.

While the applications are futuristic, the work itself is very interesting, says Florian Wurm, head of cellular biotechnology at EPFL in Lausanne, Switzerland. He says it shows for the first time that you can link together two really important ideas – synthetic biology and mind control.

“But we have to consider the ethical and legal challenges associated with this kind of technology,” Wurm says. “The moment you can control genes by thought you might be able to interfere with human behaviour, perhaps against someone’s wishes.” He doesn’t want to paint a negative picture, though. “We shouldn’t close our eyes to these inventions. It’s not going to be made into a medical device any time soon but it’s interesting to consider who it could help.”

Fussenegger says he would like to start a clinical trial within 10 years.