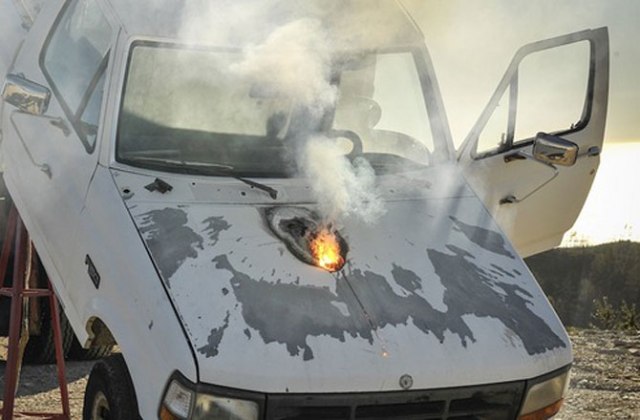 A laser weapon made by Lockheed Martin can stop a small truck dead in its tracks from more than a mile (1.6 kilometers) away, the company announced this week.

The truck was not driving normally; it was on a platform with the engine and drivetrain running, Lockheed Martin representatives said. The milestone is the highest power ever documented by a laser weapon of its type, according to the company. Lockheed is expected to conduct additional tests of ATHENA.

The ATHENA system could be a boon for the military because the laser can stop ground-based adversaries from interfering with operations long before they reach the front lines, company representatives said.

The laser weapon is based on a similar system called Area Defense Anti-Munitions (also developed by Lockheed Martin), which focuses on airborne threats. The 30-kilowatt Accelerated Laser Demonstration Initiative — the laser in ATHENA itself — was also made by Lockheed.

The recent test was the first time that such a laser was tested in the field, the company said. The Accelerated Laser Demonstration Initiative is a multifiber laser created through a technique called spectral beam combining. Essentially, the system takes multiple lasers and mashes them into one. Lockheed representatives said this beam “provides greater efficiency and lethality than multiple individual 10-kilowatt lasers used in other systems.”

Last year, Lockheed also highlighted laser defense capabilities in a demonstration test between two boats that were located about 1 mile apart. The vessels, described as “military-grade,” were stopped less than 30 seconds after the laser burned through the boat’s rubber hull.

Thanks to Da Brayn for bringing this to the attention of the It’s Interesting community.