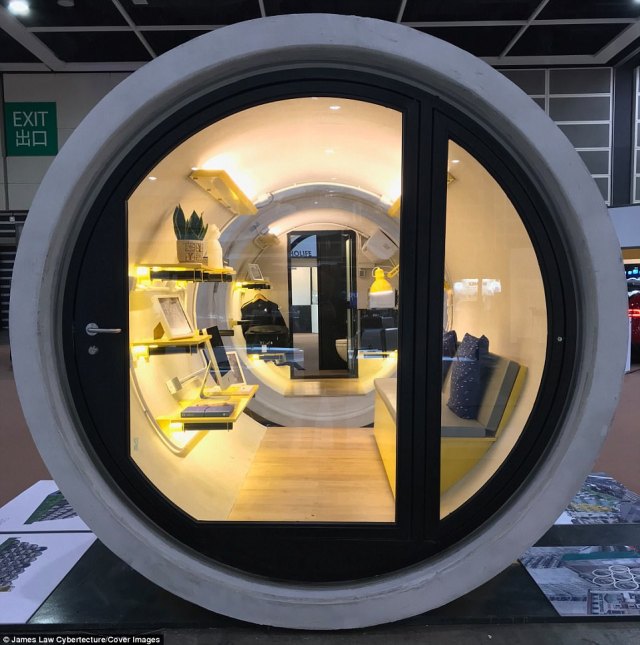 A Hong Kong architect has invented what he believed to be the solution of overcrowded cities by turning concrete water pipes into tiny homes.

The OPod Tube Housing system aims to re-purpose concrete tubes measuring just over eight feet in diameter, and turn them into ‘micro-homes’ with 100 square feet of living space.

It is the brainchild of architect James Law of James Law Cybertecture who designed the build as a possible solution to the lack of both space and affordable housing in Hong Kong.

The tubes are designed to accommodate one or two people and are equipped with the standard amenities, including a living room with a bench that converts into a bed, a mini-fridge, a bathroom, a shower and plenty of storage space for clothes and personal items.

According to Mr Law, the inspiration behind the tiny tube homes is practical, both for young people looking for homes as well as city governments trying to provide affordable options.

Although the structures are far from being lightweight at 22 tons a-piece, they require little in terms of installation and can be easily secured to one another, which reduces installation costs.

James Law Cybertecture envisions the OPod being installed in urban areas unsuitable for standard construction, such as narrow alleyways between buildings, for example. Multiple units could be stacked atop each other, with simple metal stairways providing access.

The pods are still at a prototype stage, but The South China Morning Post reported that if the plans come to fruition, each OPod will cost around $15,000 (£10,885). 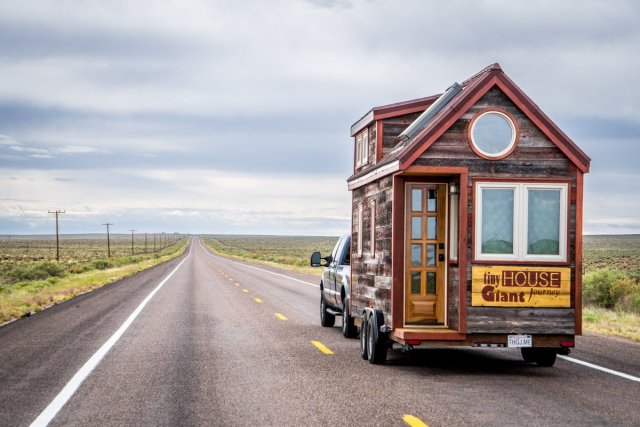 The adventure junkies’ passion for travel journalism led them to quit their jobs and pursue life on the open road. They ditched their homes in Los Angeles and built a tiny house on wheels that now serves as their permanent abode.

A year into their journey, the couple — along with their dog, Salies — has racked up 22,000 miles and visited 34 states and five Canadian provinces. They document their experience on their blog, Tiny House Giant Journey (http://tinyhousegiantjourney.com/), and on their YouTube channel (https://www.youtube.com/user/tinyhousegj).

Dutilh and Spesard shared some memories from their micro-living journey with us.

For the last year, Guillaume Dutilh and Jenna Spesard have lived in a mobile tiny house of their own making.

They towed their 125-square-foot home from Florida to Alaska and through eastern Canada, documenting the journey on their blog.

Three years ago, Dutilh was an engineer for a motorcycle manufacturer, and Spesard was an executive assistant for a movie studio. They didn’t like their jobs, but the work paid the rent.

They decided they didn’t want to waste more time pursuing anything other than travel journalism. Dutilh stumbled upon the tiny house concept. 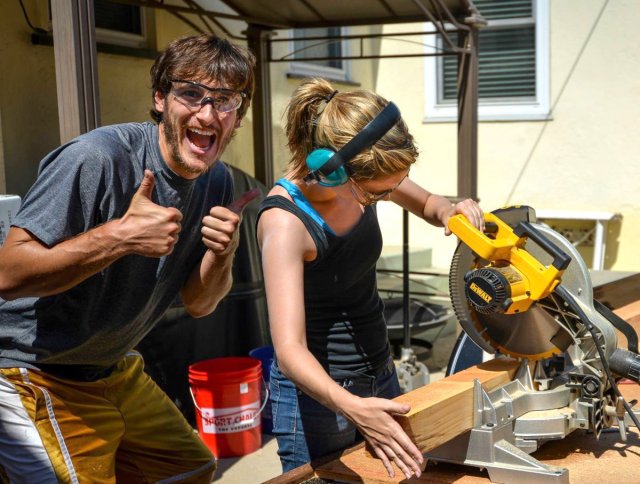 “The idea of exploring North America while creating a travel-writing and photography portfolio seemed feasible, and with a tiny house we could do it in a way that hadn’t been done before,” Dutilh says. “We had a little bit of savings and sold almost everything we owned to get the project started.” 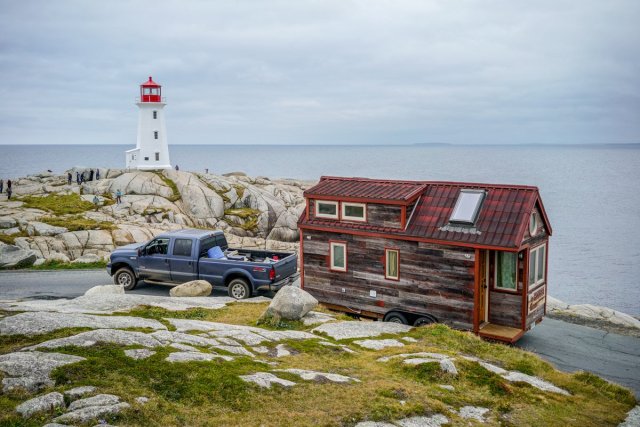 The tiny house concept attracted the couple for numerous reasons. “Besides the fact that they are adorable,” the couple says, tiny houses allow homeowners to reduce their carbon footprint and get a higher quality of life without breaking the bank.

Dutilh attended a tiny house workshop in Seattle, Washington, purchased a set of building plans and a trailer bed, and started hammering. 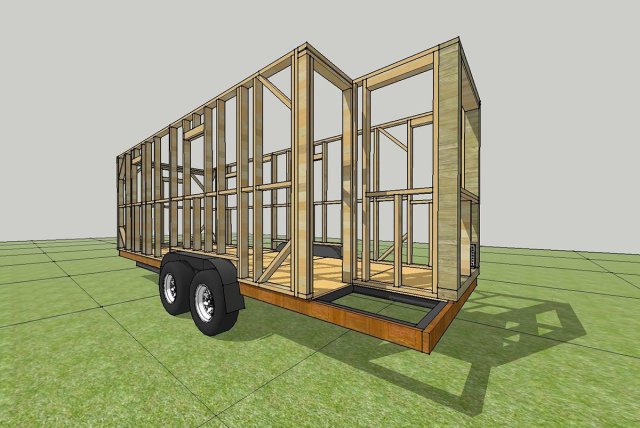 The couple invested over 1,000 work hours, including research, trips to the hardware store, and cleanup, in building their dream home. Exactly one year after they began construction, they hit the road.

In the last year, they have dipped their toes in the warm waters by the Florida Keys.

And they have sailed 180 nautical miles on a ferry from Nova Scotia to Maine.

The couple even braved the chaotic streets of New York City — an experience they call “tougher and bouncier than off-roading in California’s Mojave Desert.”

“There were taxis cutting us off, cyclists flying by, and pedestrians jumping in front of our truck,” Dutilh says. “It was as if New Yorkers, when they peeled their eyes off of their phones, were completely unfazed by the sight of our house on wheels in the middle of the skyscrapers.”

The couple documents their journey with diary-like entries and photos on their blog and YouTube channel, which has garnered almost nine million views.

“Tiny friends” (people who live in tiny houses) and the couple’s fans offer their driveways to keep lodging expenses down.

Along the way, Dutilh and Spesard have found ways to make their tiny house feel like home. They customized the build to fit their lifestyle.

Snowboards hang in the mezzanine. The house is insulated to survive harsh winters, but the duo doesn’t want to deal with towing in snow. 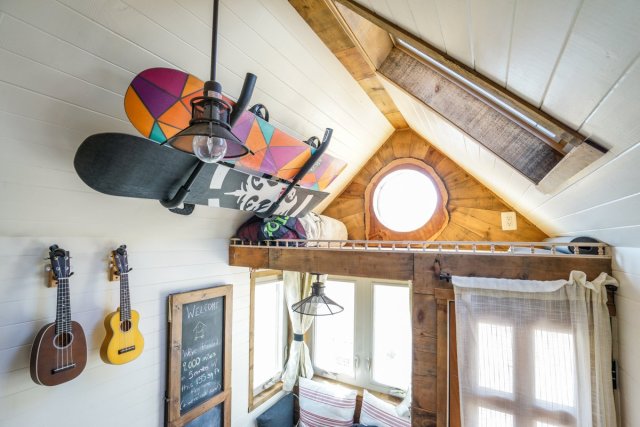 They extended the loft area so there is space for their dog, Salies, who often appears on the blog, to sleep by their bed. 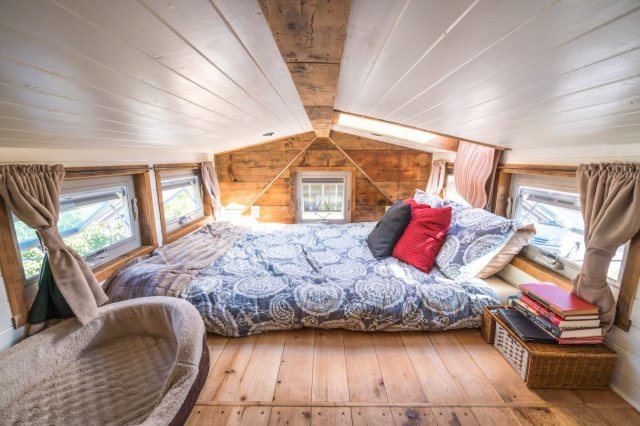 Their favorite feature in the home is the tree stump repurposed as window trim. Wood slats cut from an alligator juniper tree fan out like a sunburst.

Dutilh estimates they spend $800 a month on gas, but utilities cost barely anything.

They write and take pictures for tiny house websites, host workshops, and generate some income from their YouTube channel.

When they started their journey, Dutilh and Spesard agreed to one year on the road before evaluating their financial situation. 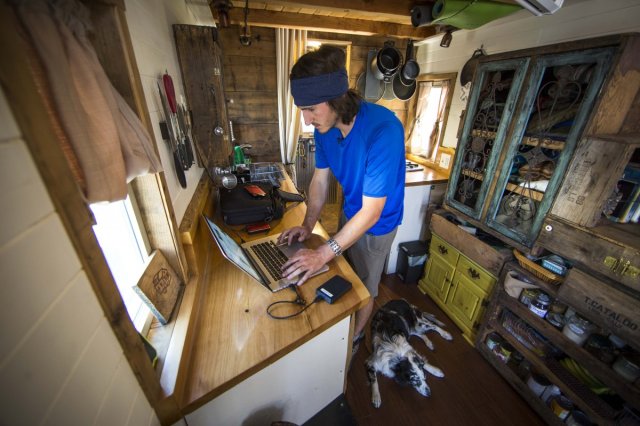 They’re already planning their summer road trip. “If we enjoy the lifestyle on the road and aren’t losing money, then why not explore a little longer?” Dutilh says. 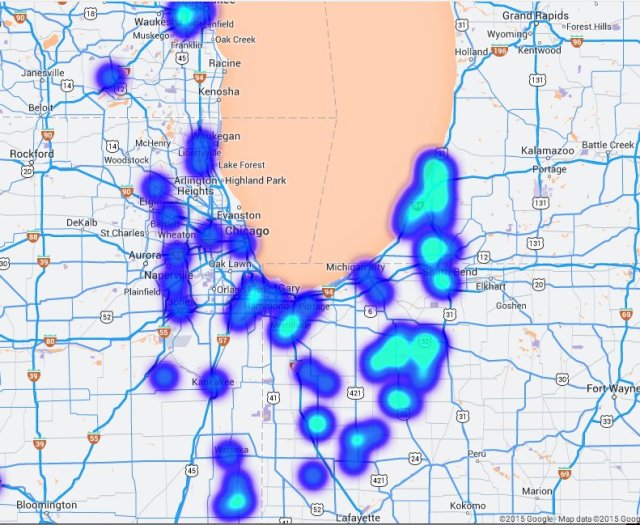 No matter how safe Walter White may have made the cooking of meth look on Breaking Bad, the real life process is dangerous and potentially deadly, even to those not directly involved.

“Chemicals such as acetone, phosphine, hydrochloric acid, lye, sulfuric acid and ammonia are all released into the home during the cooking process,” said Jeremy Shelton, a Certified Microbial Consultant who routinely tests homes across America’s Southeast for exposure. “The chemicals used are extremely dangerous and can cause serious respiratory problems, cancer, and in some cases death.”

Unfortunately, state regulations vary when it comes to the requirements of disclosing the history of former meth houses, as well as the clean up of such homes, so those buying or renting in a residence formerly used as a meth lab might never know about its past.

“I’ve dealt with everything from the unsuspecting homeowner who has unexplained respiratory issues and migraines, to apartment complexes who have had a meth lab in a single unit where we test that unit and the surrounding units,” Shelton said.

But now there is a way for potential renters and buyers to glean some insight into the pasts of their current, or potential residences.

The founders of DiedinHouse.com, which provides reports to homeowners and renters who want to know if someone has died in their home, has now added a new report that allows renters and homeowners to find out if their home was formerly reported as a site for cooking meth.

“It’s important for buyers or renters to know what they are moving into,” said Roy Condrey, founder of DiedinHouse.com.

Consumers can visit the site, input their address and pay $11.99 to get a report that includes details of a death or meth activity having occurred in the home.

It’s still early and Condrey says he has less than 50,000 reports of former meth homes across the US, however, he expects the numbers to continue to grow due to the meth epidemic sweeping the country. From the data reported thus far, Condrey said the top number of reported meth homes are in the following states.

The company is also providing a new service for renters and buyers who might want to get a bargain on a formerly “stigmatized” home.

“We can now provide a list of stigmatized addresses to buyers an renters who are looking for a bargain and claim to not care if the property is stigmatized,” Condrey said.

Thanks to Jody Troupe for bringing this to the It’s Interesting community.