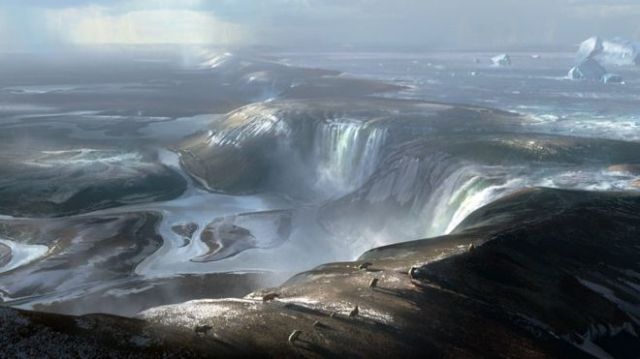 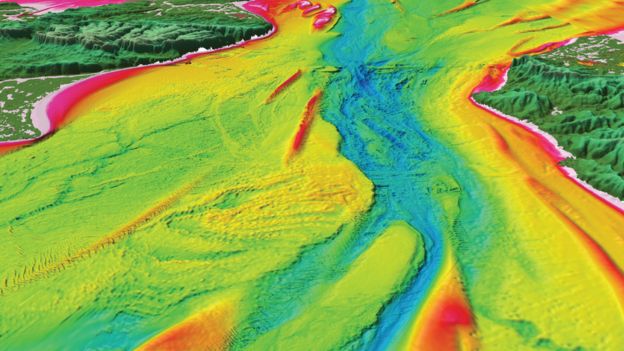 Scientists have worked out how a thin strip of land that once connected ancient Britain to Europe was destroyed.

The researchers believe a large lake overflowed 450,000 years ago, damaging the land link, then a later flood fully opened the Dover Strait.

The scars of these events can be found on the seabed of the English Channel.

The study is published in the journal Nature Communications.

“This chance geological event, if it hadn’t happened, would have meant Britain was always connected to the continent.

More than half a million years ago, in the midst of an Ice Age, a land bridge connected Dover in the South of England to Calais in northern France.

Immediately to the north of it, was a huge glacial lake, which had formed at the edge of an ice sheet that covered much of Europe.

The researchers believe that this lake started to overflow, sending vast amounts of water crashing over the land bridge.

The evidence for this was found at the bottom of the English Channel.

Decades ago, engineers who were surveying the seabed for the Channel Tunnel, discovered a series of mysterious large underwater holes.

Now further scrutiny has revealed that they were most likely caused by the lake overspill.

Prof Gupta said: “These holes are now in-filled with sediment, but what’s interesting is that they are not linear features like canyons or valleys – they are isolated depressions.

“And they occur in a line – a whole series of them stretching between Dover and Calais. And they are huge, 100m-deep carved into the bedrock and hundreds of metres to several kilometres in diameter.

“So we interpret these as giant plunge pools. We think there was basically lake water plunging over this rock ridge in the Dover Strait through a whole series of waterfalls, which then eroded and carved out these depressions.

“It’s difficult to explain them by any other mechanism.”

The researchers believe the lake started to overflow about 450,000 years ago, which would have seriously weakened the land bridge.

But they think a second catastrophic flood that took place about 150,000 years ago would have destroyed it altogether.

“We see this huge valley carved through the strait, about eight to 10km wide… and it has a lot of features that are suggestive of flood erosion,” said Prof Gupta.

Co-author Jenny Collier, also from Imperial College London, said it was not clear what caused either of these events.

She said: “Perhaps part of the ice sheet broke off, collapsing into the lake, causing a surge that carved a path for the water to cascade off the chalk ridge.

“In terms of the catastrophic failure of the ridge, maybe an earth tremor, which is still characteristic of this region today, further weakened the ridge.

“This may have caused the chalk ridge to collapse, releasing the megaflood that we have found evidence for in our studies.”

The researchers would now like to work out more precise timings of the “geological Brexit”.

This would mean drilling into the bottom of the Dover Strait and analysing the age of the sediment.
“But that would be a huge undertaking,” admitted Prof Gupta.

“The English Channel is the world’s busiest shipping lane and it has huge tidal currents. It will be hugely challenging.”

Artwork in an Indonesian cave has been found to date back at least 40,000 years, making it the oldest sign yet of human creative art — likely pre-dating art from European caves.

The findings undermine a Eurocentric view of the origins of human creativity and could prompt a ‘gold rush’ to find even older art on the route of human migration from Africa to the east.

The analysis hints at “just what a wealth of undiscovered information there is in Asia”, says Alistair Pike, an archaeologist at the University of Southampton, UK, who in 2013 identified what had been considered the world’s oldest cave art, in Europe2, and had no involvement in the current project. “This paper will likely prompt a hunt.”

The Indonesian images, discovered in a limestone cave on the island of Sulawesi in the 1950s, had previously been thought to date back only 10,000 years. Anything older would, it was assumed, have deteriorated.

Even after a technology that could test that assumption, uranium-thorium dating, became available, no one thought to apply it to the Indonesian cave — until now. Though the paint itself cannot be dated, uranium-thorium dating can estimate the age of the bumpy layers of calcium carbonate (known as ‘cave popcorn’) that formed on the surface of the paintings. As mineral layers are deposited, they draw in uranium. Because uranium decays into thorium at a known rate, the ratio of uranium to thorium isotopes in a sample indicates how old it is.

The researchers dated 12 stencils of human hands and two images of large animals. Because they sampled the top layer of calcium carbonate, the uranium dating technique gave them a minimum age for each sample.

They found that the oldest stencil was at least 39,900 years old — 2,000 years older than the minimum age of the oldest European hand stencil. An image of a babirusa, or ‘pig-deer’, resembling an aubergine with stick-like legs jutting from each end, was estimated to be 35,400 years old — around the same age as the earliest large animal pictures in European caves.

The hand stencils look similar to those found in Europe. But the animal pictures, in addition to reflecting local animals rather than mammoths as in Europe, are stylistically different. The Indonesian images “look ‘line-y’, almost like brush strokes”, says Pike, whereas early European images “look dabbed, almost like finger paint”.

“It allows us to move away from the view that Europe was special,” says Maxime Aubert, an archaeologist at Griffith University in Queensland, Australia, who led the team. “There was some idea that early Europeans were more aware of themselves and their surroundings. Now we can say that’s not true.”

Researchers posit two theories for the evolution of such artwork — either it arose independently in Indonesia, or early humans leaving Africa already had the capacity to make art, and carried it to multiple areas.

Pike thinks that researchers should seek evidence of art along the southern migration route. “India is the most obvious place to look,” he says. “I expect we’ll start getting a lot more photos [of images covered in calcium carbonate] from along that corridor from people who want to date them. This may move the field along very rapidly.” Southeast Asia will also be raked over, he predicts. There are hundreds more caves in that region of Sulawesi alone, and Aubert has also started looking in Borneo.

The discovery weakens a much-debated theory that Neanderthals, who were present in Europe until around 41,000 years ago, might have been responsible for the cave art there. “There were no Neanderthals in Sulawesi,” says Pike. But the hand stencils and choice of subject are very similar to the Indonesian figures, he adds.

Aubert hopes that the discovery might draw attention to the need to protect the caves, many of which have been damaged by mining and other industrial activity. Many of the paintings are flaking off, he says. He hopes that the site might finally, after years of candidacy, be designated a World Heritage Site by the United Nations Education, Social and Cultural Organization, which would accelerate conservation efforts.