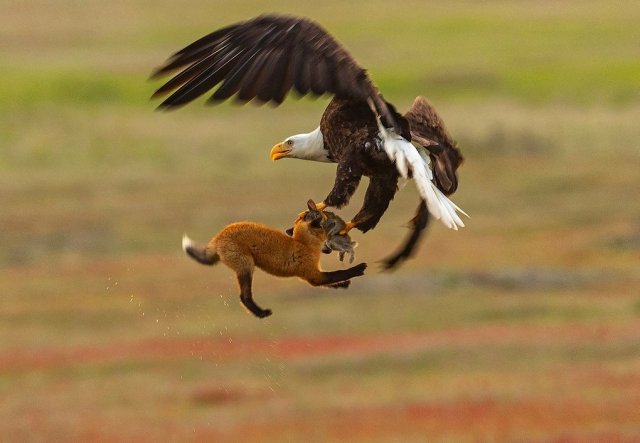 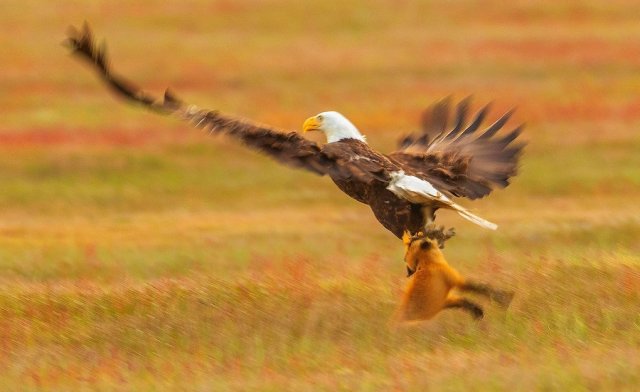 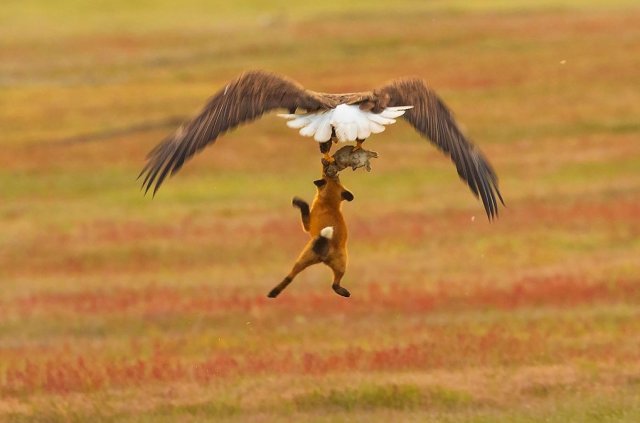 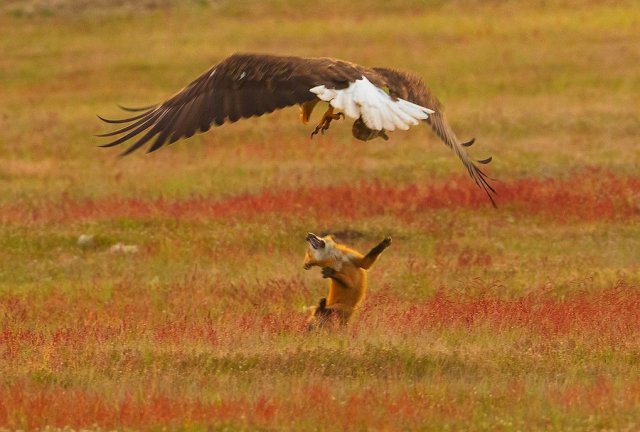 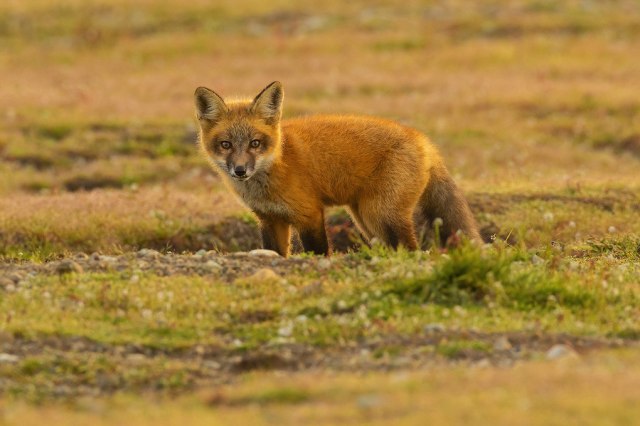 This is a tale of a rabbit, a fox and an eagle — but it’s no bedtime story.

An incredible display of nature unfolded Saturday on San Juan Island as a young fox quickly learned a valuable lesson about the pecking order in the Northwest wilderness.

A fox kit pranced along the prairie of San Juan Island National Historical Park with a rabbit clenched in its jaws, apparently pleased with its catch. Then the predator pauses abruptly, looks up and sees a bald eagle coming its way. The predator becomes the prey.

The fox tumbles and spins, and the eagle swoops to take hold of the rabbit. Both the rabbit and the fox are lifted into the air. The eagle flaps its wings. The fox doesn’t give up right away, flailing its young legs.

But the bird is too much for the red fox, which lets go of the rabbit and falls twirling back to the ground. The bird of prey won the battle.

The eight-second spectacle was captured on video.

Zachary Hartje was shooting photos when he anticipated what was about to happen in the prairie. He switched his camera to video mode.

“I was totally shocked,” he said. “No one I had ever talked to had ever seen anything like that.”

Hartje recently graduated from Gonzaga University and goes to the San Juan Islands several times a year to film and photograph the foxes there.

“It was a baby fox, so it might’ve been its first kill,” he said. “The fox just ran away into the den after. It looked pretty scared.”

Another photographer, Kevin Ebi, was also there to watch the fox kits.

“When I heard the bald eagle calling, I knew exactly what was going to happen,” Ebi said, who posted his photos to his blog, LivingWilderness.com. “I knew it wanted that rabbit.”

“After I saw the eagle finally drop the fox … I thought, ‘This is one of the most incredible things I’ve ever seen.’ “

Ebi said he has photographed eagles for years. He even published a book called “Year of the Eagle,” which chronicles the life of the Pacific Northwest birds. Even for him, the event was unprecedented.

Ebi said eagles don’t like to expend more calories than they need to get food, so when they see some other animal that’s already done the work of hunting, they might try to swoop in to steal a meal. The behavior is called kleptoparasitism.

Saturday’s confrontation was on another level. “This is the most difficult attempt I’ve ever seen and it’s extremely uncommon,” Ebi said.

The fox appeared to escape without injury, but next time it might think twice before taking its prey across the prairie.

For hundreds of years in the skies over Asia, people have used eagles to hunt down prey with deadly results.

That tradition has been in decline for decades, but now the bird’s keen eyesight, powerful talons and lethal hunting instincts are being used to take out a new kind of 21st-century vermin: drones.

The animal-vs.-machine moment is brought to you by Guard From Above, which describes itself as “the world’s first company specialized in training birds of prey to intercept hostile drones.”

The Hague-based company’s latest customers are Dutch police, who have been looking for ways to disable illegally operating drones. A police spokesman told Dutch News.nl that the effort remains in a testing phase, but he called the use of birds to combat drones a “very real possibility.”

The rise of drone technology has been matched in speed by the rise of anti-drone technology, with companies creating radio jammers and “net-wielding interceptor” drones to disable quadcopters, according to the Verge.

“For years, the government has been looking for ways to counter the undesirable use of drones,” Guard From Above’s founder and chief executive, Sjoerd Hoogendoorn, said in a statement. “Sometimes a low-tech solution for a high-tech problem is more obvious than it seems. This is the case with our specially trained birds of prey. By using these birds’ animal instincts, we can offer an effective solution to a new threat.”

A video released on Sunday by Dutch police shows an eagle swooping in at high speed to pluck a DJI Phantom out of the air using its talons. The drone is immediately disabled as the bird carries it off.

“The bird sees the drone as prey and takes it to a safe place, a place where there are no other birds or people,” project spokesman Marc Wiebes told Dutch News.nl. “That is what we are making use of in this project.”

Said Hoogendoorn, according to Reuters: “These birds are used to meeting resistance from animals they hunt in the wild, and they don’t seem to have much trouble with the drones.”

Janus, the police spokesman, told the Associated Press that the birds get a reward if they snag a drone.

Eagles’ talons, as the New York Daily News points out, are known for their powerful grips; it’s unknown whether they could be damaged by a drone’s carbon-fiber propellers.

HawkQuest, a Colorado nonprofit that educates the public about birds of prey, says eagles have enough power to “crush large mammal bones” in animals such as sloths.

“Scientists have tried to measure the gripping strength of eagles,” HawQuest notes. “A Bald Eagle’s grip is believed to be about 10 times stronger than the grip of an adult human hand and can exert upwards of 400 psi or pounds per square inch.”

According to a study cited by Wired in 2009, raptor talons are not merely powerful, but also finely tuned hunting instruments:

“…accipitrids, which include hawks and eagles, have two giant talons on their first and second toes. These give them a secure grip on struggling game that they like to eat alive, ‘so long as it does not protest too vigorously. In this prolonged and bloody scenario, prey eventually succumb to massive blood loss or organ failure, incurred during dismemberment.’”

A handler in the video, the Daily News notes, claims the birds are adequately protected by scales on their feet and legs, but researchers hope to equip the animals with another layer of defense.

The potential impact on the animals’ welfare is the subject of testing by an external scientific research institute.

“The real problem we have is that they destroy a lot of drones,” Hoogendoorn said, according to Reuters. “It’s a major cost of testing.”

The decision about whether to use the eagles is still several months away.