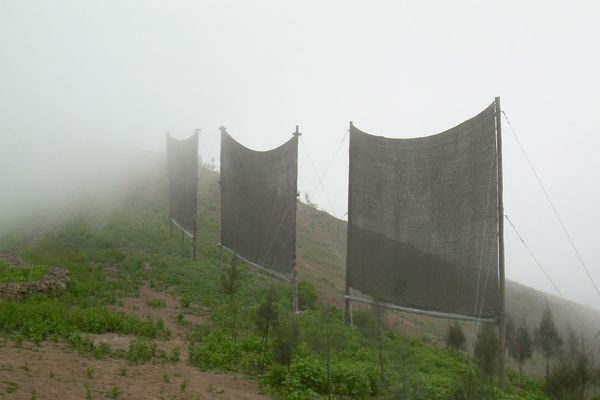 In this arid coastal region, ‘fog catchers’ — large nets strung up in areas with thick fog and high winds — are used to collect water.

The technique was pioneered in Chile in the 1950s. The fog is pushed through fine mesh where it condenses, trickles down, and gets collected below. It’s a cheap, effective, and clean way to source water.

The nets harvest precious water for crops and animals: 140 square meters provide 840 liters of water per day, shared among 85 landowners.

“Water shortage is a worldwide problem and we are not oblivious to it,” says Daniel Rojas, community leader. “It rains less and less, there is a lack of vegetation, fewer crops and people are affected in every sense. But here we have a natural resource that wasn’t being exploited.”

The ‘camanchaca’ is a thick coastal fog which rolls in most days. It blocks the sun, but the low visibility and wind is welcomed by the locals.

The Dar Si Hmad project in Morocco is significantly bigger, and uses next generation technology. The water collected here is clean enough to drink. And there are plans to use newer nets which are more efficient, doubling the amount of water they currently collect.

“They call me the fog queen,” laughs Dr Jamila Bargach.

She has good reason to smile. As director of the world’s largest fog catching project, she picked up an award at the 2016 UN climate conference in Marrakech for the work carried out by her women-led NGO.

“Our new nets have a mean average of 22 liters per square meter, which will service about 1,300 people, about 13 villages,” she says.

The fog catchers have changed the lives of women in the Sahara, who previously scheduled their days around the chore of fetching and carrying water for their families.

“The average time is 3 hours per day to get your basic 30 liters. This is becoming even more difficult because you have to walk further with the consequences of climate change: desertification and the rising temperatures,” says Dr Bargach.

“So where there’s fog, we can harness it for the community, store it when it’s needed, and then use it later, instead of looking for very expensive and fossil-based solutions like desalinizing water, or digging more bore holes, looking for even deeper aquifers.”

As with any project, it needs to be economically viable. And that’s one of the reasons Dar Si Hmad charges for its water.

“We do charge for the water, otherwise how will we keep up with the maintenance? We have aligned the prices with government prices, and we have taken 20 percent off, because we’re dealing with very poor communities. But let me tell you one thing. Even with water, the moment it becomes free, it will lose its value.”

In Chile the economic opportunities are a little different. Peña Blanca now boasts an award-winning ale from the Atrapaniebla brewery.

Marcos Carcuro and his brother have their own nets alongside those belonging to the village.

“At first they told us it was a crazy idea to brew beer from clouds”, says Carcuro. “But later, seeing the results of our first prototypes, we realized that it was going to be a better product than those made with regular water.”

Where the weather suits, and when maintenance costs are met, fog catchers provide a lifeline in vulnerable communities across the world. From Chile to Morocco, it’s a proven sustainable and scalable solution to water scarcity.