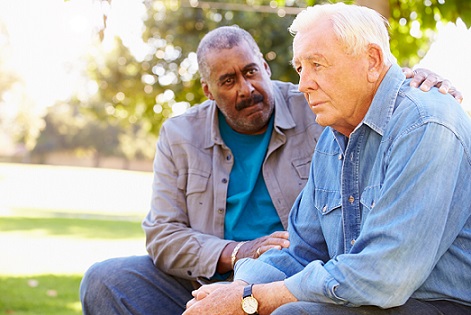 Older men of European descent (white men) have significantly higher suicide rates than any other demographic group in the United States, including older women across ethnicities and older men of African, Latino, or Indigenous decent, according to research published in Men and Masculinities.

In her latest addition to suicide research, Silvia Sara Canetto, PhD, professor in the Department of Psychology at Colorado State University, has found that older white men have higher suicide rates yet fewer burdens associated with aging. They are less likely to experience widowhood, have better physical health and fewer disabilities than older women, and have more economic resources than older women across ethnicities and ethnic minority older men.

Rather than being due to physical aging adversities, therefore, increased suicide rates among older white men in the United States may be because they are less psychologically equipped to deal with the normal challenges of aging; likely because of their privilege until late adulthood, Dr Canetto asserted.
Another important factor in white men’s vulnerability to suicide once they reach late life may be dominant cultural scripts of masculinity, aging, and suicide, Dr Canetto said. A particularly damaging cultural script may be the belief that suicide is a masculine response to “the indignities of aging.” This idea implies that suicide is justified or even glorified among men.

To illustrate these cultural scripts, Dr Canetto examined two famous suicide cases and their accompanying media coverage. The founder of Kodak, George Eastman, died of suicide at age 77. His biographer said that Eastman was “unprepared and unwilling to face the indignities of old age.”

American journalist and author Hunter S. Thompson died of suicide in 2005 at age 67, and was described by friends as having triumphed over “the indignities of aging.” Both of these suicides were covered in the press through scripts of conventional “white” masculinity, Dr Canetto stated. “The dominant story was that their suicide was a rational, courageous, powerful choice,” she said in a statement.

Canetto’s research challenges the idea that high suicide rates are inevitable among older white men. Canetto notes that older men are not the most suicide-prone group everywhere in the world; in China, for example, women at reproductive age are the demographic with the highest rate of suicide. This is additional evidence that suicide in older white men is culturally determined and thus preventable.

Dr Canetto’s research shows that cultural scripts may offer a new way of understanding and preventing suicide. The “indignities of aging” suicide script and the belief that suicide is a masculine, powerful response to aging can and should be challenged, Dr Canetto said.