The science is looking pretty unanimous on this one: Drivers of expensive cars are the worst.

A new study has found that drivers of flashy vehicles are less likely to stop and allow pedestrians to cross the road — with the likelihood they’ll slow down decreasing by 3% for every extra $1,000 that their vehicle is worth.

Researchers from the University of Nevada, Las Vegas speculated that the expensive car owners “felt a sense of superiority over other road users” and were less able to empathize with lowly sidewalk-dwellers.

They came to this conclusion after asking volunteers to cross a sidewalk hundreds of times, filming and analyzing the responses by car drivers.

But the best predictor of whether a car would stop was its cost, researchers discovered. “Disengagement and a lower ability to interpret thoughts and feelings of others along with feelings of entitlement and narcissism may lead to a lack of empathy for pedestrians” among costly car owners, they theorized in the study.

And the discovery of a car-value-to-jerkish-behavior correlation isn’t new; the research, published in the Journal of Transport and Health, backed up a Finnish study published last month that found that men who own flashy vehicles are more likely to be “argumentative, stubborn, disagreeable and unempathetic.”

According to that survey of 1,892 drivers by the University of Helsinki, those deemed to have more disagreeable character traits were “more drawn to high-status cars.”

But it also found that conscientious people often favor higher-priced vehicles, too. If you’re reading this while stuck in traffic in your brand new BMW: yes, you’re definitely in that category.

“I had noticed that the ones most likely to run a red light, not give way to pedestrians and generally drive recklessly and too fast were often the ones driving fast German cars,” Helsinki University’s Jan-Erik Lönnqvist said in a press release.

He set out to discover what kind of person is more likely to buy an expensive car, creating a personality test of Finnish car owners.

“The answers were unambiguous: self-centred men who are argumentative, stubborn, disagreeable and unempathetic are much more likely to own a high-status car such as an Audi, BMW or Mercedes,” the press release states.

“These personality traits explain the desire to own high-status products, and the same traits also explain why such people break traffic regulations more frequently than others,” Lönnqvist added.

His study cited previous research that indicated drivers behind the wheel of a costly vehicle are more likely to flout traffic regulations or drive recklessly.

But he also found people with “conscientious” characters seek out pricey models, too.

“People with this type of personality are, as a rule, respectable, ambitious, reliable and well-organised,” the statement said. “They take care of themselves and their health and often perform well at work.” 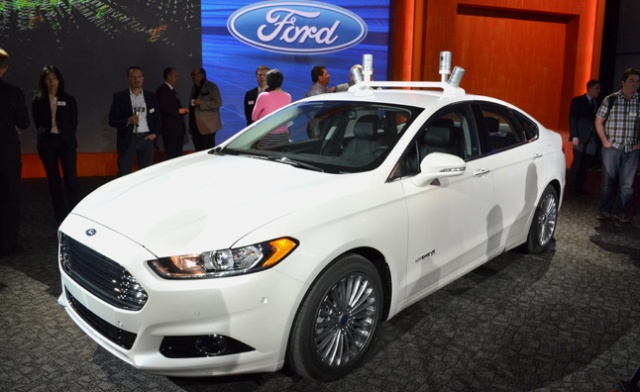 “Autonomous vehicles could have just as much significant impact on society as Ford’s moving assembly line did 100 years ago,” said Mark Fields, chief executive of Ford.

In the race to develop driverless cars, several automakers and technology companies are already testing vehicles that pilot themselves on public roads. And others have outlined plans to expand their development fleets over the next few years.

But few have gone so far as to give a definitive date for the commercial debut of these cars of the future.

At a news conference on Tuesday at the company’s research center in Palo Alto, Calif., Mark Fields, Ford’s chief executive, said the company planned to mass produce driverless cars and have them in commercial operation in a ride-hailing service by 2021.

Beyond that, Mr. Fields’s announcement was short on specifics. But he said that the vehicles Ford envisioned would be radically different from those that populate American roads now.

The company also said on Tuesday that as part of the effort, it planned to expand its Palo Alto center, doubling the number of employees who work there over the next year, from the current 130.

Ford also said it had acquired an Israeli start-up, Saips, that specializes in computer vision, a crucial technology for self-driving cars. And the automaker announced investments in three other companies involved in major technologies for driverless vehicles.

For several years, automakers have understood that their industry is being reshaped by the use of advanced computer chips, software and sensors to develop cars designed to drive themselves. The tech companies Google and Apple have emerged as potential future competitors to automakers, while Tesla Motors has already proved a competitive threat to luxury brands like BMW and Mercedes-Benz with driver-assistance and collision-avoidance technologies.

More recently, ride-sharing service providers like Uber have raised the competitive concerns of the conventional auto industry. The ride-hailing services aim to operate fleets of driverless cars that, in the future, might provide ready transportation to anyone, making it easier for people to get around without owning a car or even having a driver’s license

A Barclays analyst, Brian Johnson, recently predicted that once autonomous vehicles are in widespread use, auto sales could fall as much as 40 percent as people rely on such services for transportation and choose not to own cars.

Mr. Fields said on Tuesday that the combination of driverless cars and ride-sharing services represented a “seismic shift” for the auto industry that would be greater than the advent of the moving production line was roughly a century ago.

“The world is changing, and it’s changing rapidly,” he said, adding that Ford now sees itself as not just a carmaker but a “mobility company.”

BMW and Mercedes-Benz are among the carmakers that have seized upon the concept of “transportation as a service,” as it is called, by starting ride-sharing services of their own. General Motors has teamed up with, and bought a stake in, Lyft, the main rival of Uber.

GM and Lyft plan to have driverless vehicles operating in tests within a year. Initially, at least, those tests will be conducted with a driver in the car to take control from the self-driving technology, if necessary.

Even some auto suppliers are focusing on ride-hailing services and driverless cars. This month, the components maker Delphi announced that it was working with the government of Singapore to develop a ride service to shuttle people to and from mass transit stations in the country’s business district.

Even though Ford has committed itself to a date for a commercial introduction of its driverless cars, several questions remain about how it will move forward, said Michelle Krebs, an analyst with AutoTrader.

For example, Ford does not have a ride-sharing partner as G.M. does in Lyft, Ms. Krebs said.

In a research note on Tuesday, Mr. Johnson noted that it remained unclear how auto companies would make money from ride-sharing services.

“These are a lot of promises, but we don’t yet know how they are going to evolve,” Ms. Krebs said. “There are still missing pieces.”

One of the investments Ford announced on Tuesday was a $75 million stake in Velodyne, which makes sensors that use lidar, a kind of radar based on laser beams. The Chinese internet company Baidu said it was making a comparable investment in Velodyne.

Ford also said it had made investments in Nirenberg Neuroscience, which is also developing machine vision technology, and Civil Maps, a start-up that is developing 3D digital maps for use by automated vehicles. Ford did not disclose the amount it invested in Nirenberg or Civil Maps.

Police and car insurers say thieves are using laptop computers to hack into late-model cars’ electronic ignitions to steal the vehicles, raising alarms about the auto industry’s greater use of computer controls.

The discovery follows a recent incident in Houston in which a pair of car thieves were caught on camera using a laptop to start a 2010 Jeep Wrangler and steal it from the owner’s driveway. Police say the same method may have been used in the theft of four other late-model Wranglers and Cherokees in the city. None of the vehicles has been recovered.

“If you are going to hot-wire a car, you don’t bring along a laptop,” said Senior Officer James Woods, who has spent 23 years in the Houston Police Department’s auto antitheft unit. “We don’t know what he is exactly doing with the laptop, but my guess is he is tapping into the car’s computer and marrying it with a key he may already have with him so he can start the car.”

The National Insurance Crime Bureau, an insurance-industry group that tracks car thefts across the U.S., said it recently has begun to see police reports that tie thefts of newer-model cars to what it calls “mystery” electronic devices.

“We think it is becoming the new way of stealing cars,” said NICB Vice President Roger Morris. “The public, law enforcement and the manufacturers need to be aware.”

Fiat Chrysler Automobiles NV said it “takes the safety and security of its customers seriously and incorporates security features in its vehicles that help to reduce the risk of unauthorized and unlawful access to vehicle systems and wireless communications.”

On Wednesday, a Fiat Chrysler official said he believes the Houston thieves “are using dealer tools to marry another key fob to the car.”

Titus Melnyk, the auto maker’s senior manager of security architecture for North America, said an individual with access to a dealer website may have sold the information to a thief. The thief will enter the vehicle identification number on the site and receive a code. The code is entered into the car’s computer triggering the acceptance of the new key.

The recent reports highlight the vulnerabilities created as cars become more computerized and advanced technology finds its way into more vehicles. Fiat Chrysler, General Motors Co. and Tesla Motors Inc. have had to alter their car electronics over the last two years after learning their vehicles could be hacked.

Startups and auto-parts makers also are getting involved in cyberprotections for cars.

“In an era where we call our cars computers on wheels, it becomes more and more difficult to stop hacking,” said Yoni Heilbronn, vice president of marketing for Israel-based Argus Cyber Security Ltd., a company developing technologies to stop or detect hackers. “What we now need is multiple layers of protection to make the efforts of carrying out a cyberattack very costly and deter hackers from spending the time and effort.”

San Francisco-based Voyomotive LLC is developing a mobile application that when used with a relay switch installed on the car’s engine can prevent hackers with their own electronic key from starting a vehicle. Its technology also will repeatedly relock a car’s doors if they are accessed by a hacker.

Automotive industry trade groups are working on a blueprint of best practices for safely introducing new technologies. The Auto-Information Sharing and Analysis Center, created by the Alliance of Automobile Manufacturers and the Global Automakers Association, provides a way to share information on cyberthreats and incorporate cybercrime prevention technologies.

In the Houston car theft, a home-security camera captures a man walking to the Jeep and opening the hood. Officer Woods said he suspects the man is cutting the alarm. About 10 minutes later, after a car door is jimmied open, another man enters the Jeep, works on the laptop and then backs the car out of the driveway.

“We still haven’t received any tips,” the officer said.

The thief, says the NICB’s Mr. Morris, likely used the laptop to manipulate the car’s computer to recognize a signal sent from an electronic key the thief then used to turn on the ignition. The computer reads the signal and allows the key to turn.

“We have no idea how many cars have been broken into using this method,” Mr. Morris said. “We think it is minuscule in the overall car thefts but it does show these hackers will do anything to stay one step ahead.”