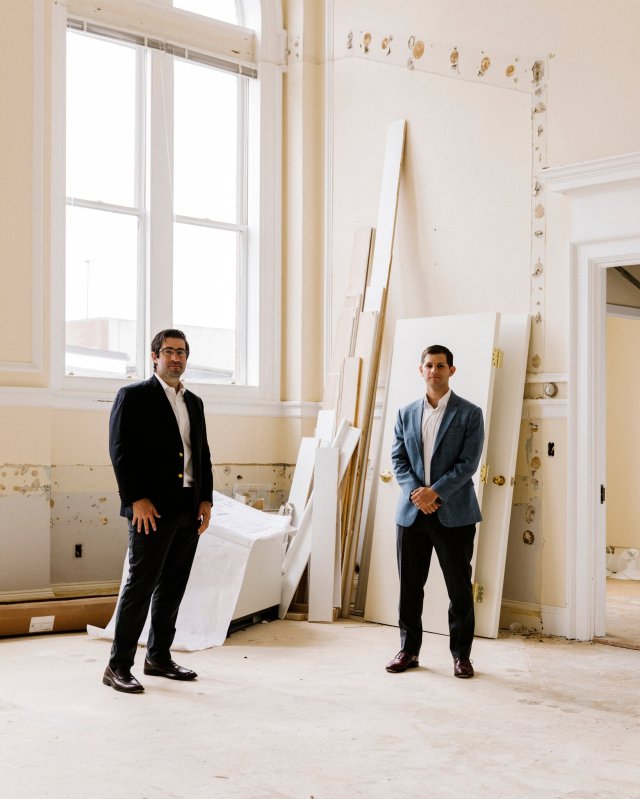 Mike Teal, who lives in Tallahassee, began developing symptoms of A.L.S. in 2016. He takes an experimental drug called AMX0035 which aims to slow the progression of the disease.

Seven years ago, Joshua Cohen, then a junior at Brown University majoring in biomedical engineering, was captivated by the question of why people develop brain disorders. “How does a neuron die?” he wondered.

After poring over scientific studies, he sketched out his ideas for a way to treat them. “I was sitting in my dorm room and I had kind of written out the research on these crazy-looking diagrams,” he recalled.

A study published on Wednesday in the New England Journal of Medicine reported that the experimental treatment he and another Brown student, Justin Klee, conceived might hold promise for slowing progression of amyotrophic lateral sclerosis, the ruthless disease that robs people of their ability to move, speak, eat and ultimately breathe.

More than 50 clinical trials over 25 years have failed to find effective treatments for A.L.S., also called Lou Gehrig’s disease, which often causes death within two to five years. But now, scientific advances and an influx of funding are driving clinical trials for many potential therapies, generating hope and intense discussion among patients, doctors and researchers.

The new study reported that a two-drug combination slowed progression of A.L.S. paralysis by about six weeks over about six months, approximately 25 percent more than a placebo. On average, patients on a placebo declined in 18 weeks to a level that patients receiving the treatment didn’t reach until 24 weeks, said the principal investigator, Dr. Sabrina Paganoni, a neuromuscular medicine specialist at Massachusetts General Hospital’s Healey & AMG Center for A.L.S.

“It’s such a terrible disease and as you can imagine, for the folks who have it or the family members, it’s just desperation that something’s going to work,” said Dr. Walter Koroshetz, director of the National Institute of Neurological Disorders and Stroke, who wasn’t involved in the new study. “Any kind of slowing of progression for a patient with A.L.S. might be valuable even though it’s not a big effect.”

He and other experts were careful not to overstate the results and noted that the drug wasn’t shown to improve patients’ condition or halt decline. The study evaluated safety and efficacy in a Phase 2 trial with 137 participants, not as large and long as many Phase 3 trials often required for regulatory approval. Experts and the authors themselves said further trials were necessary.

Still, doctors and advocates said the relentlessness of the illness and the availability of only two approved A.L.S. medications, neither significantly effective, gives urgency to finding additional treatments. The A.L.S. Association, an advocacy group, said that since the study found the drug to be safe and patients can die waiting for other trials, it should be made available to people with the disease as soon as possible.

“That can mean the difference between being able to feed yourself versus being fed or not needing a wheelchair versus needing a wheelchair, and if we can delay that level of disability, that’s a big deal for our community,” said Neil Thakur, chief mission officer of the association, which helped finance the study.

The association will urge the Food and Drug Administration to grant approval as soon as the company applies for it, and then require rigorous follow-up studies. The group will also urge the company, Amylyx, a Massachusetts start-up the students founded, to seek the agency’s permission to provide the drug for compassionate use while it is still being evaluated.

A.L.S., the most common motor neuron disorder, diagnosed in about 6,000 people worldwide each year, has drawn greater attention of late, bolstered by prominent people with the disease, like Stephen Hawking, the astrophysicist who died in 2018; Steve Gleason, a former professional football player; and Ady Barkan, a health care activist who used a computer-generated voice at this year’s Democratic National Convention because he can no longer speak.

There is now legislation in Congress to accelerate A.L.S. therapy access and a $25 million federal research program. The Ice Bucket Challenge, a 2014 fund-raising juggernaut featuring celebrities and others dumping icy water on their heads, generated about $220 million. More than 20 treatments are being tested, including stem cells, immunotherapy and genetic therapies for the 10 percent of cases caused by known mutations. Results from other trials are expected soon.

“This is a really exciting time,” said Dr. Robert Miller, director of clinical research at Forbes Norris MDA/A.L.S. Research Center at California Pacific Medical Center, who is involved in several trials, but not the new study.

Most of the study’s participants were already taking one or both of the approved A.L.S. medications: riluzole, which can extend survival by several months, and edaravone, which can slow progression by about 33 percent. It’s possible the new drug, AMX0035, provided additional benefit. Dr. Merit Cudkowicz, the Healey Center’s director and the study’s senior author, said she envisioned the new drug combination would be taken alongside existing medications.

The study is the first clinical trial supported by Ice Bucket Challenge money to publish results, said the A.L.S. Association. Amylyx financed the bulk of the study and agreed to use a percentage of income from sales of the drug to repay 150 percent of the association’s grant to fund more research.

Mr. Cohen’s idea in 2013 was that a combination of taurursodiol, a supplement, and sodium phenylbutyrate, a medication for a pediatric urea disorder, could safeguard neurons by preventing dysfunction of two structures in cells, mitochondria and the endoplasmic reticulum.

He quickly involved Mr. Klee, a senior neuroscience major who was a fraternity brother and fellow player on the university’s club tennis team. Over cheap sparkling wine, “we both said ‘let’s start a company,’” Mr. Klee said. “We had no idea what we were doing.”

They heard skepticism from several experts they consulted until they met with Rudolph Tanzi, a prominent Alzheimer’s expert who had belonged to their fraternity.

Dr. Tanzi told them to test whether the drug combination protected rat neurons from a bleach-like chemical that kills them. With $8,000 from a university grant, their parents (two of whom are physicians) and savings, they hired a professional lab, which found that their combination salvaged 90 percent of neurons, Dr. Tanzi said.

“’That’s impossible,’” he said he told them, urging more tests, which showed 95 percent of neurons were saved.

“Guys, you got something here,” Dr. Tanzi told them. He became an Amylyx co-founder and leads its scientific advisory board.

The combination was christened AMX0035 because 3 and 5 are the favorite numbers of Mr. Cohen’s fiancée. During YMCA basketball sessions with Dr. Tanzi, they discussed trying it for Alzheimer’s. But investors weren’t interested.

Dr. Tanzi introduced the young men to Dr. Cudkowicz, who had once studied sodium phenylbutyrate and convinced them to test it for A.L.S. It’s now also in an Alzheimer’s trial.

The A.L.S. study, called Centaur, conducted across the country by leading A.L.S. researchers, involved patients who developed symptoms within 18 months before the trial and were affected in at least three body regions, generally signs of fast-progressing disease. Two-thirds received AMX0035, a bitter-tasting powder they mixed with water to drink or ingest through a feeding tube twice daily.

“The data that we see here indicates there may be some beneficial effect but it doesn’t look like what you’d call a home run,” Dr. Koroshetz said.

Some patients experienced gastrointestinal side effects like nausea and diarrhea, but after three weeks those effects largely subsided, and overall, the drug was safe, researchers said.

In most secondary measures, including muscle strength, respiratory ability and whether patients were hospitalized, AMX0035 appeared better than placebo, although it wasn’t statistically significant. Another measure, a biomarker of neurodegeneration, didn’t seem significantly affected. A few patients died in both groups, but experts said identifying the impact on mortality would require evaluation over a longer period.

“This is very encouraging,” said Dr. Neil Shneider, director of the Eleanor and Lou Gehrig A.L.S. Center at Columbia University, who was not involved. “The question is, is the effect on function sustained beyond the six-month trial period and does it have an effect on survival?”

Researchers said they would soon publish longer-term data because most participants opted to take the drug combination after the trial, and some have now taken it for over two years.

Experts were torn about whether F.D.A. approval should be granted, since Phase 3 results are often required.

“From my heart, I’d say we are so desperate for meaningful treatment for A.L.S. that something that looks as promising as this might well be approved,” Dr. Miller said. “From my head, I’d say it could be chance. We’ve seen that before where Phase 2 looked really good.”

Dr. Shneider noted that some patients have already been obtaining one or both components from Europe or Asia and taking it themselves. “There’ll be a lot of interest from patients and families to get out this drug,” he said.

But experts also said that making the drug available soon might make it difficult to recruit patients for subsequent trials. And insurers may not cover drugs approved based on Phase 2 results, Dr. Koroshetz said. Some patients have had difficulty getting insurance coverage for edaravone, which costs about $148,000 a year and was approved after a Phase 3 trial of the same size and duration as Centaur. Amylyx officials declined to provide a price estimate for their treatment.

In interviews, two trial participants said they believed AMX0035 was beneficial. Given the unpredictable trajectory of the disease, they said any specific effects were hard to describe. Neither knows if they received the drug or placebo during the trial, but they’ve received the treatment since.

Mike Teal, 52, of Tallahassee, Fla., began having symptoms in 2016 and has taken the drug since at least the spring of 2018, when his trial ended. Soon after, he also started edaravone.

He currently has limited speech, needs a feeding tube, often uses a wheelchair and requires a breathing machine every few hours. Last year, he had to stop working at the gift and accessories store he owns with his wife, Lauren.

He said he’s had no negative side effects and believes the drug may have eased cramps in his neck, abdomen and legs.

“I’m confident it has slowed my progression,” he wrote in an email. “But it’s difficult to measure.”

Jeff Derby, 61, a retired forest products company manager in Cloverdale, British Columbia, said that when he was diagnosed in July 2018, doctors described his disease as relatively slow-progressing. He thinks his decline has become more gradual in the 18 months he’s been taking the drug since his trial ended. Mr. Derby, who also takes the two approved medications, said weakness in his left hand isn’t worsening as quickly.

“I think AMX0035 will ultimately be part of a treatment cocktail like there is for other diseases where you’ll take three, four or five different things, and as a group, they will help slow the progression to the point where you can live a somewhat normal life,” he said.