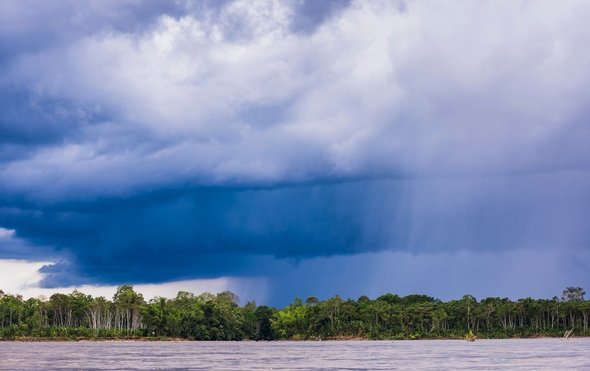 The tiniest particles of airborne pollution may affect the weather, new research suggests—even in some of the most pristine parts of the world.

A study published in the journal Science found that ultra-fine aerosol particles, produced by industrial activity, are helping storms grow bigger and more intense in the Amazon basin. Many scientists had long assumed that these microscopic particles—which can be more than 1,000 times smaller than the width of a human hair—were far too small to have any effect on the weather.

But a combination of observations and model simulations, focusing on the tropical rainforest outside the Brazilian city of Manaus, indicate that these tiny particles are actually causing bigger storm clouds and heavier rainfall. The findings suggest that the increase in pollution since the onset of the Industrial Revolution may have “appreciably changed” the formation of storm clouds, the researchers write. And they suggest that changes in the Amazon’s climate could potentially reverberate in other parts of the world.

The research comes at a time of growing interest in aerosols—small pollution particles, often produced by industrial activities—and their influence on global weather and climate. Aerosols are known to produce a temporary cooling effect on the climate, and research increasingly suggests that air pollution may have helped to cover up some of the effects of human-caused climate change (Climatewire, Jan. 22). This means ongoing efforts to reduce pollution may be accompanied by enhanced warming, scientists note, along with a variety of other weather-related side effects.

The new study reinforces the idea that pollution has a significant influence on atmospheric processes, down to daily weather patterns. Previous research has already demonstrated that larger aerosol particles can lead to stronger storms.

Particles in the air can interact with water vapor and form droplets, influencing the formation of clouds. One widely covered modeling study, published in the Proceedings of the National Academy of Sciences in 2014, suggested that pollution from Asia can intensify storms in the northwestern Pacific and may even affect weather patterns over North America.

But until now, the influence of the tiniest pollution particles has been largely overlooked.

“Previously, scientists had this concept that these ultra-fine particles, they are too small to be ‘activated,’ to be transformed into cloud droplets,” Jiwen Fan, the lead study author and a scientist at the Pacific Northwest National Laboratory, told E&E News.

The Amazon provided a “perfect setting” to investigate, she added. Rainforest outside Manaus remains relatively untouched by human activity, and the background aerosol levels are low. But winds often sweep in pollution from the city, providing a kind of natural laboratory to test the effects of higher and lower levels of particles in the air.

The researchers found that the tiny particles had an even greater effect on storm intensity than their larger counterparts. The tiny particles are lifted higher into the air before they begin to interact with water vapor and transform into cloud droplets, forming taller clouds. The resulting high concentration of water droplets forming the clouds release large amounts of heat as they condense, which helps to invigorate the air rising up through the cloud and intensify the brewing storm.

So far, the study only documents the process in a specific part of the Brazilian Amazon, meaning more research would be needed to determine whether the same effects apply elsewhere. But the researchers suggest that other humid and remote parts of the world, where human influence is starting to grow, may be similarly affected. For instance, the influence of shipping traffic in the open ocean might be a point worth investigating, Fan suggested.

The researchers also suggest that climatic changes in the Amazon could affect precipitation patterns in other places. This remains to be investigated—but the authors point out that the water cycle in the warm, humid Amazon plays a significant role in regulating climate patterns elsewhere around the world.

If human pollution continues to encroach on the region’s remaining untouched areas, they write, the resulting weather changes “could have profound effects on other places around the globe.”